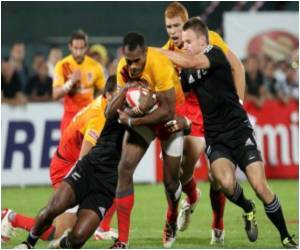 The finding is based on experiments involving 12 professional rugby players carried out by UK Sport, which is helping the British Olympic squad with scientific advice, the Daily Mail reported.

Internet dating may just be what cupid ordered in the age of the internet! Internet dating is here to stay - for the dull and the delirious, the young and the old, for the married and the single.

It is believed that the findings will be able to help coaches boost the effectiveness of training sessions.


In the study, the players were shown clips from five different categories of video.

A clip of U.S. sitcom 'The Big Bang Theory' was used to convey 'humor', images of malnourished African children was used for 'sadness', exotic dancing conveyed 'eroticism', footage of training sessions by UFC star Brock Lesnar were classified as 'motivational', while images of rugby tackles were used for 'aggression'.

Saliva samples were used to measure the players' testosterone levels after watching the clips.

"Rugby is a naturally combative sport and putting yourself in an aggressive frame of mind is quite important to how you perform," Scott Drawer, head of research at UK Sport, told The Times.

Drawer added the caveat that any video clip's effects on players was likely to be different, depending on the individual and the athlete.

The finding will be published in the journal Hormones and Behavior.