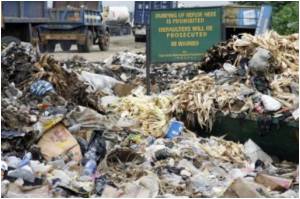 Environment activists are criticizing the waste treatment of Hong Kong which they believe is nothing less than an environment crisis with the outskirts of the city dotted with three growing mountains of waste collected from one of the most populated cities of the world.

While the city may look well-kept, its three huge outdoor landfill sites are piled high with rubbish and are set to reach capacity by 2020, according to the government's Environmental Protection Department (EPD).

Some predictions say the first will be full in a year or two.


"We need to have a clear roadmap for waste reduction, otherwise our rubbish will be on the streets in seven years' time," environmental scientist Professor Jonathan Wong, of the Hong Kong Baptist University, told AFP.
Advertisement
The majority of the 13,000 tonnes of rubbish dumped at landfills in Hong Kong each day is termed 'municipal solid waste' (MSW), generated by households, business and industry.

With a population of more than 7 million, Hong Kong is sending 1.3 kilograms of MSW per person to landfills daily. Most of it is 'domestic waste' - rubbish from homes and institutions including schools, as well as refuse collected by public cleaning services, from food to furniture.

Its per capita generation of domestic waste is significantly higher than other leading Asian cities, including Tokyo, Seoul and Taipei.

The public's attitude to consumption has been partly blamed for the problem.

"Hong Kong is a fast-moving city and people want to keep up with the trends, whether it's clothing or iPhones," said Angus Ho, executive director of Hong Kong environmental NGO Greeners Action.

"They may have a perfectly good piece of furniture but they will dump it for a new one because there is no sense of responsibility - there's a habit of consuming and disposing of things."

Ho, along with other campaigners, also blames government inertia for Hong Kong's mountains of rubbish.

The EPD published a 10-year framework for managing the city's waste in 2005 but has been criticised for failing to implement much of the plan and for having no concrete schedule for instigating it.

Currently it is working on another waste management "blueprint", expected to be released in the coming weeks.

In a statement to AFP, the EPD acknowledged Hong Kong "has a waste crisis".

It added that this can only be dealt with "by taking multi-pronged actions, ranging from waste reduction at source to enhancing waste recovery, as well as building a comprehensive and modern waste treatment infrastructure that can handle different types of waste".

The government and green groups believe that waste charging for households and businesses according to the amount they dispose of is the key to reducing the amount of rubbish generated - such schemes have worked well in Taipei and Seoul.

But successive administrations have been hesitant to take on the public, commerce and political opponents to push through that policy.

"The government doesn't want to do anything too drastic and creative because they will face a hard time in LegCo (Hong Kong's legislative council)," Edwin Lau, director of Friends of the Earth Hong Kong, told AFP.

"An effective framework is there - they don't need to reinvent the wheel. They just need to get it rolling," he said.

Lau says the HK$0.50 (US$0.06 ) plastic bag levy, introduced in 2009 and which currently covers 3,000 shops including supermarkets and convenience stores, shows how effective a charging system can be in changing people's behaviour.

The EPD says use of plastic bags at the retailers under the scheme has reduced by 90 percent.

Plans have also been discussed to extend current landfills and build an incinerator, both proposals which are unpopular with residents and some environmentalists.

While the government stalls on the bigger picture when it comes to managing the city's waste, smaller-scale groups are trying to get the message across at the grass roots.

Hong Kong Recycles is a non-profit organisation set up last year which issues four reusable bags to its subscribers so that they can separate their paper, plastic, metal and glass for recycling - the bags are picked up from their doorsteps once a week.

Although some apartment blocks in the city already have recycling bins, they are often too small for the number of residents.

"A lot of Hong Kong people do care about the environment and want to recycle, but they don't want to walk down to a community centre or to wheelie bins with their rubbish. We thought of a way to make it easier for them," said operations manager Joshua Tan.

Subscribers pay HK$25 ($3) a week for the service and there are currently 250 clients, including corporates, plus a waiting list, says Tan.

Retail company director Marc Dambrines, 39, who has lived in Hong Kong for 17 years, said he signed up because HK Recycles was able to explain clearly to him where his rubbish would go and how it would be used.

"It's easy to recycle, but often you don't know what happens at the end of the process," he said.

Hong Kong already recycles around half of its waste, but Professor Wong says compulsory recycling should be introduced as part of any government waste reduction plan.

"The government and people need to join hands now to cope with the crisis," he said.

For many in Hong Kong however, the frenetic pace of daily life means thinking about waste is not high on their list.

"Most people don't worry about it. I think about how much my household produces, but sometimes convenience is a priority," said 40-year-old housewife Ophelia, who believes waste charging would make a difference.

"It would give me a push to do better," she said. "Chinese people are very money-minded. If we're charged for something we will be more careful."