Walking in a Busy City May Help Ward Off Anxiety 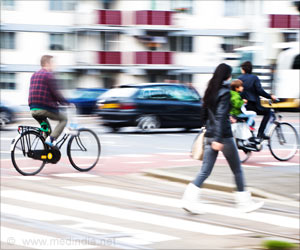 People are always advised to walk in a peaceful greener environments to keep their minds calm and stress-free. But this may not be the same for everyone.

A Journal of Consumer Psychology study found evidence that people who are more prone to anxiety should instead take a walk in a busy, urban environment.

Millions of birds die in the US each year as they collide with moving vehicles. In spite of this things have been looking up, at least in the case of cliff swallows.
Advertisement
‘People with neurotic personalities had more success restoring their cognitive abilities after they viewed words related to a busy urban environment.’


The researchers started by asking participants to perform tasks that drained them mentally, such as writing sentences without using the letters "A" or "N." Then participants answered questions that revealed their level of neuroticism, such as whether they were a worrier, irritable, highly strung or experienced moods that often go up and down.

Nostalgia May Help Keep Anxiety and Depression Away

Memories and positive feelings expand the range of our thoughts and actions, and in doing so, support our resilience to psychological disorders.
Advertisement
Then all the subjects performed tasks that exposed them to words or pictures associated with either a natural or urban environment. Surprisingly, the results revealed that people with neurotic personalities had more success restoring their cognitive abilities after they viewed words related to a busy urban environment. The nature-related words, however, were more beneficial for people who were not generally neurotic.

The researchers also discovered that neurotic people may not necessarily have to go to a busy urban setting to restore themselves mentally. In fact, nature could provide frenetic, stressful cues when the participants were exposed to words like "bear," "cliff" and "thunder." Similarly, people low in neuroticism may not need to seek out nature to revive themselves mentally. Cues from a calm place in a busy city--such as a bookstore or library--restored participants in this category.

"People tended to do better in environments that fit with their personality," Newman says. "Imagine someone with a neurotic personality like Woody Allen. If you put him in a forest it could be very off-putting rather than rejuvenating."

The researchers also discovered that restoring the mind was tied to one's ability to exert self-control. This correlation between environment and self-control could have implications related to health outcomes, Newman says. People may make healthier food choices if they choose environments that match their personality type, he explains.

One of his experiments lends support to this theory. Neurotic participants had more financial discipline when they viewed safari vacation pictures and descriptions that matched their personality type. They were more likely to stick to a limited vacation budget when they saw safari photos with lions gnashing teeth and rhinos charging, but this was not the case when they viewed photos with leopards sleeping and rhinos grazing peacefully.

The findings could influence the way companies design retail and online spaces or offer products. If a product or store tends to attract a certain personality type, then the company may want to design the environment to be compatible with consumers. An experiential product, such as a cruise, may want to offer activities that appeal to both neurotic and non-neurotic passengers, such as zip-lining or time on the beach, Newman says.

The different environmental needs of varying personality types may be increasingly relevant because studies show that Americans have shifted towards higher levels of neuroticism in recent decades, Newman says.

Heres Why Some People Are More Prone To Anxiety

People diagnosed with anxiety are less able to distinguish between an original safe stimulus and that of a new, similar stimulus.
Advertisement
<< Is High-Density Lipoprotein Cholesterol Really Good?
Many People With Asthma Dont Recognize Warning Symptoms: Su... >>

Cushing's syndrome may be caused by tumors of the adrenal glands or other parts of the body that produce excess cortisol.

More News on:
Amyotrophic Lateral Sclerosis (ALS) Body Types and Befitting Workouts Walking for Fitness and Weight Loss Walking As An Exercise Who Else Wants to Know How Walking Helps Heart and Brain? Surprising Health Benefits of Post-meal Walking