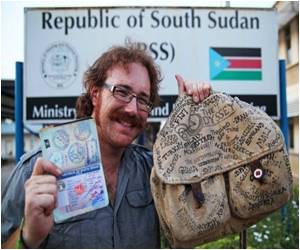 Loading his arms with as many battery-powered wall clocks he can carry, the Sudanese man pushes one through the taxi's open window. His head follows.

"For you, a good price," he tells the passenger. "How many dollars?" he asks expectantly, hoping for an offer.

An anthropometric data collection on underweight, stunting and wasting in young children below the age of five years living in the Mumbai slums.
Advertisement

On the other side of the car, the taxi driver negotiates with a vendor selling cheap flashlights.


The Merchants of McNimir Street are always at your service -- a walking department store serving a captive market of motorists stuck in gridlock on one of central Khartoum's busiest roads.

Patricia Martin struggled to provide for her three children as the street sweeper salary of around 900 euros ($1,200) earned by her husband each month was not enough.
Advertisement
Without leaving their cars, drivers can buy the latest newspapers, glasses to read them with, and tissues to wipe the ink from their hands afterwards.

The vendors' amusing and seasonally changing range of goods includes electric haircutters, weighing scales, and a complete set of fishing gear which, one eager seller assures, is perfect for use in the Nile River just straight ahead at the end of McNimir.

Toy aeroplanes are held aloft, hoping to catch the eyes of children or their parents.

Street vending, widespread in Africa, reflects a troubled Sudanese economy that saw youth unemployment reach around 34 percent in 2011, according to government estimates cited in a March report by the UN Development Programme.

"Almost half the population of Sudan live in poverty," UNDP said, adding that since South Sudan separated three years ago with most of the north's oil production, Sudan has become poorer.

The Khartoum street vendors, some of them teenagers, say that dodging cars and law enforcement officers in temperatures near 40 degrees Celsius (104 Fahrenheit) is not the life they dreamed of.

"My high school marks weren't good enough for university and I couldn't find a job."

Mohammed, the son of a farmer, hails from Gezira state, south of Khartoum, where years of under-investment and other factors have led to decay of the agricultural infrastructure, according to analysts.

On a bad day, he earns nothing.

A good one can bring him up to 100 pounds (about $10.75 at the widely used black market rate), and he says business has picked up during the Muslim holy month of Ramadan, which began on June 29.

"I think that's because people aren't able to go to the market while they are fasting," Mohammed says.

"Our prices are also lower than the market," he adds, an incentive for buyers struggling with inflation that rose to 45 percent in June.

Lower prices may be the rule but street vendors try to squeeze as much as they can from unwary customers. The cheap-looking black plastic flashlight eventually sold for 10 pounds, down from 25 which the seller initially asked from the taxi driver.

"Their prices are better than at another market," agrees Hassan Mubarak, who is stuck in traffic and confesses to having occasionally bought from the young men walking between the rows of cars.

"Sometimes it's just a small thing so there's no need to go to a shop," he says.

Street shopping is convenient, but Mubarak and other motorists complain over the poor quality of the goods.

Mohammed, selling the vegetable chopper, says vendors get their inventory free of charge from regular markets in downtown Khartoum or its twin city, Omdurman. After making a sale, they pay the market traders and keep a premium for themselves.

The system puts the vendors at risk of losing money if their unsold merchandise is seized by law enforcers cracking down on the street trade.

"We have to run fast because those goods aren't ours," says Omar Hussein, 19, of North Kordofan state.

He has spent a year and a half on McNimir.

"It's very hard under the hot sun, and dangerous amid the traffic. Our colleagues have often been struck and injured," Hussein said, offering fresh limes for sale.

Newcomer Essam Ali, 15, is already aware of those dangers, having arrived three months ago from Gezira after the death of his father.

Business is better during Ramadan than other months, Ali says, but his income of 50-75 pounds a day doesn't leave much after he pays for food and lodging.

"Before Ramadan I hawked drinking water and now I'm selling tissues. I know from the veterans of this business that by the end of Ramadan I have to change to other items like children's clothes and decorations" for the Eid al-Fitr festival, Ali says.

Islam Hassan, 17, selling prayer mats, has a similar story. He dropped out of school to help his four younger brothers while their father is ill.

"I'm not satisfied with this job. My dream is to go back to school. But that seems impossible," he says.

This is the tragedy of the Merchants of McNimir, says Susan Bashir, a motorist who rarely buys from them because the goods are of low quality.

"What makes me sad about them is that they're young and should be in school. They are a lost resource," she says.

Obesity is the root cause of problems like diabetes, heart disease, stroke, arthritis and gall bladder disease. A serious look at our strategies is needed to tackle this fast growing epidemic.
Advertisement
<< Encephalitis Outbreaks Kill More Than 150 In India
Better Screening for Psoriatic Arthritis Required: Panel of... >>

Who Else Wants to Know How Walking Helps Heart and Brain?
News Archive
News Resource
Advertisement
News Category
How to Reduce Needle Anxiety in Children? Tobacco Addiction: Here's How to Break the Habit Parents are 'Winging It' on Their Kids' Mobile Use Ankle and Ankle Movements While Riding an Hoverboard Is It Healthy to Let Your Mind Wander?
More News
Sign up for Wellness Consult a Doctor Sign up for Selfcare

The Essence of Yoga How to Reduce School Bag Weight - Simple Tips Vent Forte (Theophylline) Iron Intake Calculator Blood - Sugar Chart Selfie Addiction Calculator Color Blindness Calculator Find a Doctor Pregnancy Confirmation Calculator Blood Pressure Calculator
This site uses cookies to deliver our services. By using our site, you acknowledge that you have read and understand our Cookie Policy, Privacy Policy, and our Terms of Use