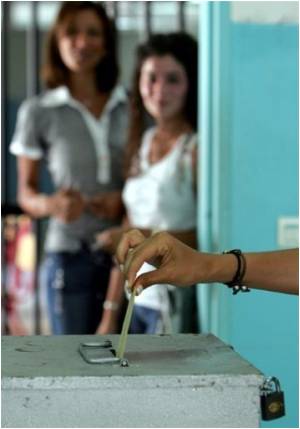 A recent study provides scientific evidence that voting in national elections is actually a stressful event with measurable hormonal changes, with Election Day 2012 just weeks away.

"Emotional changes are related and affect various physiological processes, but we were surprised that voting in national democratic elections causes emotional reactions accompanied by such physical and psychological stress that can easily influence our decision-making," according to Prof. Hagit Cohen from the Anxiety and Stress Research Unit at Ben-Gurion University of the Negev's Faculty of Health Sciences.

US Election Outcome in Virginia Could Be Tipped By Abortion

The economy is the dominant concern for voters in Virginia as is the case across the United States, but here abortion is such a hot issue that it could tip the balance on election day.
Advertisement

The study published in the journal European Neuropsychopharmacology that the level of cortisol - a hormone secreted in times of stress to help the body cope with threats -- was nearly three times higher just before voting than the cortisol level of the control group, and nearly twice their level 21 months later. When a person is in a state of stress, threat or emotional distress, the body releases hormones including cortisol, known as the "stress hormone."


The study was conducted on Israel's Election Day in 2009 with people who were on their way to vote. They were asked to give a saliva sample for cortisol testing and to complete a questionnaire examining their emotional arousal at a stand that was placed 30 ft. from the ballot box. The control group consisted of other people from the same area who were asked to give a saliva test and complete the questionnaire on post-election day.

According to a new poll, almost 80 percent Americans said that they would have 'definitely' voted if presidential elections were conducted today.
Advertisement
The study also found that people were more emotionally aroused just before casting their ballot. "Since we do not like to feel 'stressed out'," adds Prof. Cohen, "It is unclear whether this pressure on Election Day can influence people and cause them not to vote at all. Impact on voter turnout is particularly important given that the stress levels rise if our preferred party or candidate for whom we want to vote is not popular in the polls."

In some much-awaited and welcome news, women in Saudi Arabia will not need any consent from their male counterparts to run or vote
Advertisement
<< Study: Parent-Clinician Communication Needs Improvement
Cell Death in Heart Attack Triggered By Enzyme >>

Vent Forte (Theophylline) Indian Medical Journals Diaphragmatic Hernia A-Z Drug Brands in India Iron Intake Calculator The Essence of Yoga Find a Hospital Post-Nasal Drip Color Blindness Calculator Noscaphene (Noscapine)
This site uses cookies to deliver our services. By using our site, you acknowledge that you have read and understand our Cookie Policy, Privacy Policy, and our Terms of Use