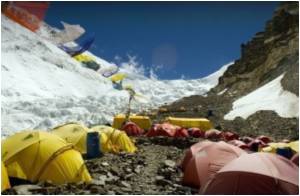 Twenty people have done the unimaginable task of clearing the world's highest peak of rubbish left behind by climbers.

Namgyal Sherpa, the leader of the Extreme Everest Expedition 2010, took his group above the 8,000-metre mark to collect empty oxygen bottles, gas canisters, torn tents, ropes and utensils, Sky News reports.epal Tourism officials have released a video of the trash collection, which has been gathering on the mountain for decades.


Since 1953, over 4,000 adventurers have scaled the peak, and most of them have left behind their used gear and rubbish before descending due to exhaustion and lack of oxygen.


While there have been past efforts to clean up the mountain, no team has ever ventured into the thin air and freezing temperatures of the so-called death zone.

"Collecting the rubbish is quite a risky task. Such tasks cannot be carried out by anybody," Sky News quoted Namgyal, as saying.

After a dangerous 40-day campaign, the waste brought back to base camp was expected to weigh around 2,000kg.

The team was not only concerned with the impact of garbage on Mt. Everest, but also with the threat of global warming.

"We used to climb over snow. These days we climb over rocks. If it continues this way succeeding generations will only be able to read in books that there was once snow in the Himalayas," Namgyal said.

Singaporean National to Climb Everest to Raise Awareness Over Child Abuse
Santosh Kumar, a Singaporean national of Indian origin and an outdoor adventure enthusiast has intended to scale the Mount Everest this March to raise awareness on prevention of child sexual abuse.
READ MORE

Urban Pollution Linked to High Levels of Ozone on Mt. Everest
The first ozone measurement taken on the summit of Mount Everest has revealed surprisingly high levels of ozone, which scientists involved in the expedition suggest might have originated
READ MORE

Nepal Reaches New Heights by Stage Gay Weddings on Mt. Everest
As part of a bid to promote the country as the homosexual tourism capital of Asia, Nepal is set to stage same-sex weddings on Mount Everest.
READ MORE