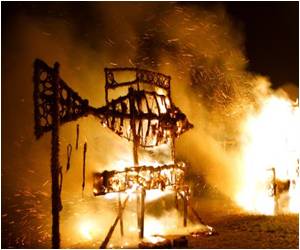 A volunteer fireman, Chilean Victor Hernandez, lost his own home when out trying to protect those of others, while battling blazes that have charred much of Valparaiso.

"I would do it over again -- a million times. Being a volunteer is a real calling," the 22-year-old paint factory worker told AFP.

A group of firefighters in Melbourne has appealed to the national workplace commission to win back their rights.
Advertisement

Like the rest of his colleagues at Valparaiso's volunteer 4th company, Victor is desperately scrambling to control the fires which President Michelle Bachelet says could be the picturesque port city's worst.


At his age, he might be new to the calling, as he calls it. But he has four years of firefighting under his belt.

His firefighting company is pulling out all stops to get this record-breaking blaze under control once and for all. It has already claimed 15 lives and left 11,000 people homeless.

A new pill is on trial among Australian firefighters, which is designed to record vital readings in the body, for instance- skin temperature,
Advertisement
Hernandez understands the pain of all those who lost their homes. It has happened to him this week, too.

"I realized how huge the fire was. So I ran down to my company for orders. They sent me running over to La Cruz Hill. But then we had some water problems there because the fire was incredibly strong," Victor told AFP.

"As we were heading away with the fire truck, in the distance, I could see that the neighborhood where my own house is was burning."

Hernandez said he suddenly realized that the family home he grew up in, and his memories there, were about to be reduced to ashes.

"Over at my house, lots of people were there: my parents, brothers and sisters and an aunt and uncle; but they were all evacuated. And that was the most important thing," he says.

The city, an architectural gem located about 80 miles (120 kilometers) from the capital Santiago, is famed for its UNESCO-listed center with cobblestone streets and brightly painted wooden homes.

While the fabled historic center has been mostly spared so far, most of the over 2,000 homes lost so far were wooden -- like those on Lide Hill where Victor lived. They burned up quickly as wildfires raged uncontrolled.

"I am hurt. And I am frustrated. But material things you can get back," said Hernandez. "What I really cared about was that my family was fine, and everybody made it out safely."

For now, his family is making things up as they go along.

"My mom and aunt have gone off to Olmue (80 km away); my brother is staying at his girlfriend's house. My dad works at city hall so he is staying there. And I am staying at the firehouse for now," he explained, his face reddened by the heat and blisters on his hands and feet.

"I am exhausted, achy, and tired. But as long as we have to be fighting the fire, I am going to be there."

- Not about being paid -

In Chile, fire fighters are all-volunteer. There are no salaried firemen. Volunteers usually live off donations.

They are often seen out on the street collecting money for the upkeep of their firetrucks, often donated by European companies.

Some firehalls open their dining rooms to the public at lunchtime, operating as informal restaurants to keep money coming in.

Firemen routinely sleep with a radio nearby as they take turns staffing the station round the clock.

As if Victor had not given enough to his city, he even donates some of his factory earnings to the firehall to support its mission.

"This is a volunteer thing; I am not here to get paid," he stressed. "I like what I do, and I would not change a thing."

Except that he dreams of saving enough to study to become a paramedic or a nurse.

"I will have to take time to get my things on track, until we get out from under all this, and we recover from this disaster."

Trauma Care
News Archive
News Resource
Advertisement
News Category
Tale of Love Hormones Shaping our Responses to Society How to Reduce Needle Anxiety in Children? Tobacco Addiction: Here's How to Break the Habit Parents are 'Winging It' on Their Kids' Mobile Use Ankle and Ankle Movements While Riding an Hoverboard
More News
Sign up for Wellness Consult a Doctor Sign up for Selfcare

Blood Donation - Recipients Calculate Ideal Weight for Infants Blood - Sugar Chart Find a Hospital Drug Side Effects Calculator Find a Doctor Blood Pressure Calculator Post-Nasal Drip Pregnancy Confirmation Calculator Color Blindness Calculator
This site uses cookies to deliver our services. By using our site, you acknowledge that you have read and understand our Cookie Policy, Privacy Policy, and our Terms of Use