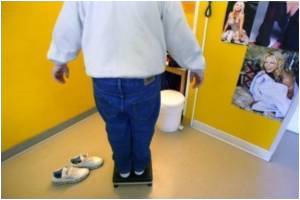 Vitamin D deficiency seems to be prevalent among obese teens, triggering off an increased risk of chronic diseases according to researchers at Hasbro Children's Hospital.

After treatment, a repeat examination disclosed that although there was a notable improvement in the vitamin D level, serum vitamin D levels became normal in only 28 per cent of the teens.


Nor did further treatment improve the vitamin levels. The research team supposes that the vitamin may be confined in the body fat, not showing up in the tests.

Obesity is a condition where there is excess accumulation of body fat which poses a risk to the health of the individual. It can affect children and adults.
Advertisement
Vitamin D status is impacts muscle power and a deficiency may actually inhibit the obese teen's ability to increase physical activity.  Also, having fewer outdoor activities, and consequently, less sun exposure, leads to the vitamin deficiency. Adolescents don't eat enough vitamin D-rich foods such oily fish, eggs, and from fortified dairy products and breakfast cereals.

Zeev Harel, lead author of the study, has reported on the need for further studies to confirm that the stabilizing of vitamin D levels lowers the health risks brought about by obesity.