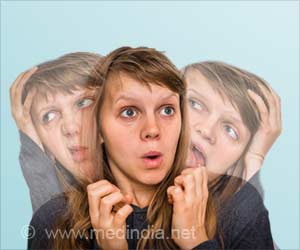 A research team at The Ohio State University found that children with Bipolar disorder had higher blood levels of a protein associated with vitamin D compared to children without mood disorders.

Finding a blood test to confirm bipolar disorder could improve care and cut the current 10-year average lag time between onset and diagnosis, said Ouliana Ziouzenkova, the study's lead author and an associate professor of human nutrition at Ohio State.


In the study of 36 young people, levels of the vitamin D binding protein were 36 percent higher in those with bipolar disorder than in those without a mood disorder. The study appears online in the journal Translational Psychiatry.
Advertisement
Confirming the significance of the blood marker with further research will take time, but Ziouzenkova and her collaborators are enthusiastic about its potential, and the benefits it could offer to children and their parents.

"Childhood bipolar disorder can be very difficult to distinguish from other disorders, especially in youth with certain types of depression," said Barbara Gracious, a study lead co-author and associate professor of clinical psychiatry and nutrition at Ohio State.

"Prompt diagnosis and appropriate treatment alleviates the suffering of the child and family, and can potentially lessen the risk for suicide," she said.

Sensitive and specific biomarkers could give clinicians more confidence in choosing the most appropriate treatment, and decrease lags in proper diagnosis, Gracious said, adding that more research will be needed to confirm whether testing for the vitamin D protein could prove a valuable tool in practice.

The clinical part of the pilot study was conducted at Harding Hospital at Ohio State's Wexner Medical Center and included 13 children without mood disorders, 12 children with diagnosed bipolar disorder and 11 children with major depressive disorder.

Ziouzenkova said it made sense to look at vitamin D binding protein because it potentially plays a role in brain inflammation.

The researchers also looked at inflammatory markers in the blood, but found no significant correlations. Looking for the nutrient vitamin D in the blood, as opposed to the binding protein, appears to have low diagnostic power, she said.

"We wanted to look at factors that could be involved in mood disorders on a cellular level and that could be easily found in the blood," Ziouzenkova said.

To date, finding a reliable blood marker for bipolar diagnosis has been elusive, she said. Her lab used an intricate technique to evaluate blood plasma, in which they essentially used biological "bait" to fish for inflammatory factors. That helped them identify the vitamin D binding protein as a potential diagnostic target.

"We want to help psychiatrists and other doctors diagnose children early and accurately. Once bipolar disorder progresses, it is more challenging to treat," Ziouzenkova said.

If further research confirms the findings, developing a blood test would be a fairly straightforward and relatively inexpensive proposition, she said. Ziouzenkova is currently seeking support for a larger study using blood that has already been collected from patients with bipolar disorder, including adults.

Bipolar Disorder in the Family May Increase Risk of Suicide in Teens
Genetic risk of bipolar disorder may increase the chances of suicidal attempts in those who have ......

Teenage Cannabis Use can Lead to Bipolar Disorder Symptoms
The link between adolescent cannabis use and hypo-mania has been found. Periods of elated mood, ......

Adolescents With Bipolar Disorder Likely to Develop Substance Use Disorder
Bipolar and substance use disorders often develop together in adolescence, and this co-occurrence .....