Vitamin C deficiency may impair the mental development of newborn babies, according to a new study.

According to lead researcher Jens Lykkesfeldt, like guinea pigs, human beings are dependent on getting vitamin C through their diet.


He speculates that vitamin C deficiency in pregnant and breast-feeding women may also lead to impaired development in foetuses and new-born babies.

This vitamin seems quite important to brain activity.

Tests have shown that mouse foetuses that were not able to transport vitamin C develop severe brain damage, which resembles the ones found in premature babies and which is linked to learning and cognitive disabilities later in life.

In some areas in the world, vitamin C deficiency is very common - population studies in Brazil and Mexico have shown that 30 to 40 per cent of the pregnant women have too low levels of vitamin C, and the low level is also found in their foetuses and new-born babies.

"We may thus be witnessing that children get learning disabilities because they have not gotten enough vitamin C in their early life," said Lykkesfeldt, from Faculty of Life Sciences at University of Copenhagen.

"This is unbearable when it would be so easy to prevent this deficiency by giving a vitamin supplement to high-risk pregnant women and new mothers," Lykkesfeldt added.

The researchers are currently studying how early in pregnancy vitamin C deficiency affects the embryonic development of guinea pigs and whether the damage may be reversed after birth.

The study appears in American Journal of Clinical Nutrition. 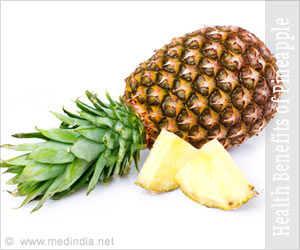 Health Benefits of Pineapple
Pineapples consumed by and large by people all over the world are a rich source of Vitamin C and have a host of other health benefits.
READ MORE