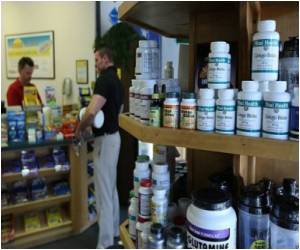 Smokers with higher levels of vitamin B6 and a certain essential amino acid have less risk of developing lung cancer than those lacking the nutrients, cancer experts said Tuesday.

A study of nearly 400,000 participants that included current and former smokers in 10 European countries found that people with high levels of vitamin B6 and the essential amino acid methionine -- found in most protein -- were at least half as likely of getting lung cancer.

But the researchers did not conclude that consuming more of the nutrients reduced risk of lung cancer, the deadliest cancer worldwide, and stressed the importance of quitting smoking.


"Similar and consistent decreases in risk were observed in never, former, and current smokers, indicating that results were not due to confounding (factors that can influence outcomes) by smoking," the researchers wrote.

Easy to understand info & tips with diagrams about vitamin supplements like vitamin C, B6, B9 & B12. Latest research news on each vitamin's benefits and drawbacks for better consumer understanding.
Advertisement
"The magnitude of risk was also constant with increasing length of follow-up, indicating that the associations were not explained by preclinical disease."

Former and current smokers with higher serum folate levels -- in addition to high amounts of vitamin B6 and methionine in their blood -- also had 67 percent less risk of developing the disease.

Lung cancer claims some 1.3 million lives worldwide each year, accounting for nearly 18 percent of all cancer deaths, according to the World Health Organization.

The researchers, whose study was published in Wednesday's issue of the Journal of the American Medical Association, also noted that many former smokers have lung cancer and that a "non-trivial" number of people who never smoked get the disease, especially among women in parts of Asia.

Paul Brennan of the International Agency for Research on Cancer in Lyon, France, led the study of nearly 900 lung cancer patients.

The procedure by which tissue samples are obtained from the lung is known as lung biopsy. The biopsy tissues ...