Vitamin B Offers No Benefit for Stroke Patients: Study 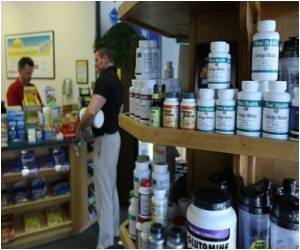 Vitamin B, while harmless, does not help prevent a repeat occurrence of strokes or heart attacks, according to a study released Wednesday.

The findings, based on first-ever clinical trials, suggest that vitamin B supplements should no longer be recommended for patients who have suffered severe vascular events, the researchers said.

Previous research has shown a link between an increase of amino acid in the blood -- a condition known as homocysteine -- and a higher risk of stroke and cardiovascular disease.


At the same time, other studies have shown that a daily dose of B vitamins can reduce abnormal amino acid levels.

What remained unknown was whether the supplements would also help cut the risk of repeat heart attacks or strokes, fatal or non-fatal.
Advertisement
To find out, an international consortium of doctors and scientists in 20 countries conducted a clinical trial with more than 8,000 patients who had recently had a serious heart or vascular problem.

Half the participants were given a daily dose of B vitamins -- a mix of folic acid, B6 and B12 -- while the other half swallowed lookalike placebos.

During a follow-up period that averaged 3.4 years, there was no statistically significant difference in the outcome: 15 percent of the vitamin B group experienced a major vascular event, compared to 17 percent for the control group.

At the same time, the vitamins did not cause any unwanted side effects.

The results were published in the British medical journal The Lancet.

Source: AFP
Advertisement
<< Mud from the Deepest Place on Earth, Researchers Hope, Coul...
Obesity Rates in US Growing 'Faster Than Anyone Imagined' >>

Vitamin B-12
Vitamin B-12 is also known as cobalamine or cyanocobalamine, owing to the presence of the metal, ......

Stroke - Top Ten Facts
Strokes occur when blood flow to an area of the brain is cut off. It is imperative to detect the ......