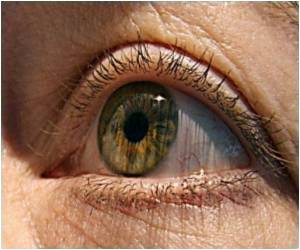 The benefit of using a neurotrophic factor to treat a severe form of age-related macular degeneration called geographic atrophy (GA)has been highlighted by the results of a clinical trial.

The finding could offer hope to millions suffering from GA.

A phase 2 clinical trials for the treatment of GA has become the first study to show the benefit of a therapy to slow the progression of vision loss for this disease.


Lead author Kang Zhang of the University of California, San Diego, Shiley Eye Center, and his team found that long-term delivery of ciliary neurotrophic factor (CNTF) served to re-nourish the retina and stop or slow the loss of visual acuity caused by the disorder.
Advertisement
According to Zhang, professor of ophthalmology and human genetics at the UCSD School of Medicine and director of UCSD's Institute of Genomic Medicine, there is currently no effective treatment for dry AMD or GA.

"This could open the door to long-term treatment of dry AMD, using a simple surgical procedure," he said.

Age-related macular degeneration, or AMD, is a leading cause of vision loss. It is a disease that causes cells in the macula - the part of the eye that allows us to see in fine detail - to die. There are two forms of the disorder, wet and dry AMD. GA is considered the end stage of dry AMD, where central vision is lost.

The ECT utilized a capsule that contains genetically engineered cells to continuously produce CNTF over a 12-month period.

The CNTF-secreting capsule was implanted in the back of the study subject's eye.

The implant allows the CNTF molecules to diffuse into the eye tissue, while keeping out antibodies and immune cells that would attack and destroy the CNTF-producing cells.

There was a statistically significant difference in the change of the total macular volume in the eyes of study participants at the 12-month point, versus baseline in the high-dose group, according to Zhang.

The patients treated with a high dose of CNTF also showed an increase in retinal thickness as early as four months after implant, an increase that correlated to the stabilization of vision.

The study is published in the Proceedings of National Academy of Sciences (PNAS).

Find a Hospital Vent Forte (Theophylline) Accident and Trauma Care Pregnancy Confirmation Calculator Find a Doctor Turmeric Powder - Health Benefits, Uses & Side Effects Blood - Sugar Chart The Essence of Yoga Nutam (400mg) (Piracetam) Drug - Food Interactions
This site uses cookies to deliver our services. By using our site, you acknowledge that you have read and understand our Cookie Policy, Privacy Policy, and our Terms of Use