Virgin 'Miracle' on a Tree In New Jersey Allures Folks 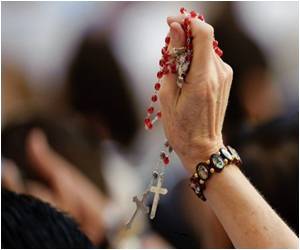 In a crime infested New Jersey town ardent Catholics are flocking to what folks believe is the miraculous apparition of the Virgin Mary's image on a tree trunk.

On Tuesday, a crowd of several dozen people stood around the tree, praying, taking photos and swapping stories of what they call a miracle.

Paediatric oncologists are likely to accept religion as a resort when medicine has failed the patient, according to a new study.
Advertisement

West New York, just across the Hudson from Manhattan, has been better known for crime, a depressed economy and a mayor who along with his son faces federal computer hacking charges.


But the town's central Bergenline Avenue is now the unlikely setting for a diminutive Ginkgo biloba tree with a knot that, worshippers claim, has the form of Our Lady of Guadalupe.

Religion Can Dictate Whom You Trust and Whom You Don't

Religious people have more trust in authority, while those with moral convictions feel distrust, according to a study.
Advertisement
The Catholic Church has distanced itself from the supposed miracle and there's no shortage of scoffers in West New York, a tough place with a high Latin American immigrant population.

Yet on a sweltering summer's day, worshipers showed no sign of losing faith.

Boisterous and implacable, they vowed to stay put until the town's troubled mayor, Felix Roque, protects the tree for good.

"We want to build a monument," said Maria Baez, 35, one of the first to announce she'd seen the Virgin at the tree and now one of the stalwarts mounting day-and-night vigils.

Already the base of the tree and an adjacent fire hydrant are draped in rosaries, votive candles, flowers and pictures celebrating Our Lady of Guadalupe, a major figure in Mexican Catholicism.

Police have erected a metal barricade around the tree and a patrol car is parked alongside to ensure safety for both crowd and tree. Roque has been quoted in the local press as saying that the town spends $1,000 a day to manage the situation.

According to Baez, the extraordinary chain of events began early on the morning of July 10, when a woman was traveling down the avenue to go to work.

"She saw a light and it was the Virgin. She went on to work, but she was frightened," Baez explained. The woman, named Carmen Lopez, tried to alert police and the mayor but received short shrift. Soon after, Baez says she experienced a similar vision.

"When I got here I saw her: she said 'I'm the Virgin,'" Baez recounted to a chorus of admiring "wows" from others gathered on the sidewalk by the tree. "I was speechless."

Since then, there've been no reported sightings of Jesus' mother herself, but the knot in the tree is said to bear an uncanny resemblance to famous pictures of the Guadalupe Virgin in her cloak.

The image is framed by an oval shaped split in the tree's bark and a dark coloring inside is said to match the shape of the cloaked figure.

Ruben Rafael, 49, recently retired from the US Navy, said this was his fifth visit to the tree.

"I was convinced," he said. "There's a lot of crime in this town. So this helps us Catholics, Christians. She's here to cure the pain in this town."

Not everyone is so believing.

"I respect every religion, but really I don't believe this at all," Ismael Garcia, a 27-year-old carpet salesman, said.

His friend, Giovanni Valenti, an assistant mechanic, 36, pointed at the parked police car and said "they should be spending this money on something else."

Valenti pointed out that many of the Ginkgo trees lining the street have splits in the bark and knots that could be imagined to represent some picture or another.

"Tons of these trees have it. It's normal for them in this climate. It's a law of physics," he said.

Standing by the tree, another man slyly pulled out a cellphone and showed a reporter a picture of a knot taken in a similar Ginkgo. The knot somewhat resembled a human face, complete with an angular nose.

But he was not ready reject the faithful crowd entirely.

"I'm a Catholic and I believe very much in the Virgin, but the picture in this knot is just a coincidence," Ed Venicio, 35, said.

"However, I believe that whether or not it's real, the important thing is that it motivates people's faith. It gets them to go back to church and remember that God exists."

The Essence of Yoga Accident and Trauma Care Drug Interaction Checker How to Reduce School Bag Weight - Simple Tips Blood Donation - Recipients Indian Medical Journals Sinopril (2mg) (Lacidipine) Post-Nasal Drip Sanatogen Selfie Addiction Calculator
This site uses cookies to deliver our services. By using our site, you acknowledge that you have read and understand our Cookie Policy, Privacy Policy, and our Terms of Use