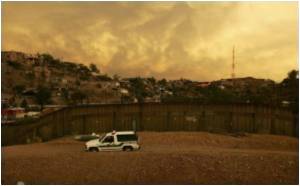 Inhabitants of Mexico's wealthiest city of Monterrey once feared Mexico City for its notorious crime, but some have now moved there to escape an explosion of violence at home.

Grenade attacks on police, bystanders killed in shootouts, and "narcoblockades" -- when drug gang members steal cars to block roads -- shook the industrial hub and its northern state of Nuevo Leon last year, where total murders rose 300 percent to 828, with more than 500 blamed on drug violence.

It was when La Hera ranch still lay in fields outside Mexico City that Guadalupe Pena's great grandparents began working with horses.
Advertisement

Violence hit new levels this January, when 20 police were killed.


"We had an assassination, execution or murder every six hours," Eloy Cantu, senator for Nuevo Leon, told AFP.

Authorities blame a spillover from neighboring Tamaulipas state, where a turf war between the Gulf cartel and its former hitmen the Zetas has spread fear and forced entire populations out of villages.

Acapulco, once a magnet for Hollywood stars on Mexico's Pacific coast, is now fighting a reputation for gruesome killings, including 15 decapitated bodies discovered this month.
Advertisement
Analysts say other gangs, including the powerful Sinaloa cartel, are backing their traditional rival the Gulf cartel to take on the Zetas.

The new violence came as a shock in Mexico's third largest city, which has a population of more than four million and was once considered a safe haven, including for wealthy drug lords.

With its scores of industrial parks and world-renowned Tecnologico de Monterrey university, the city has long attracted companies from Whirlpool to General Electric, and students from the United States, France or Japan.

Lying some 140 miles (225 kilometers) south of Texas and on major axes across Mexico and to US coasts, it was rated as the best city in Latin America for conducting business by Fortune magazine in 1999.

"The same reason that Monterrey is such an important industrial center is the same reason it's so critical for the cartels," said Scott Stewart, of Texas-based analysis group Stratfor.

As elsewhere in Mexico, the rising violence has been accompanied by more crime as gangs seek money to finance their battles with each other.

Some wealthy families have now fled to the United States or other Mexican cities. Those left behind talk of rising kidnappings.

"For rent" signs hang outside empty restaurants and bars in the city's old quarter, or "barrio antiguo", where business owners complain of growing extortion.

The US State Department last August ordered diplomats to remove their children from Monterrey, after a shooting outside the American Foundation School.

Residents now hold gatherings in their homes to avoid going out at night.

"We're more careful and I use a more unobtrusive car than I had before to go to the factory," said long-time resident French businessman Jacques Maurin, one of a handful to comment openly on the situation.

Although growth is picking up in Mexico following a big blow from the economic crisis, many are cautious for the future in a city which produces eight percent of the country's gross domestic product (GDP).

"We're all aware that it (the violence) obviously has a negative impact," said Maurin, whose company manufactures lighting.

More than 34,600 people have died in drug-related violence across Mexico since 2006, when President Felipe Calderon launched a military crackdown on organized crime, involving tens of thousands of troops.

The Mexican business leaders' organization Coparmex last month said insecurity was now at intolerable levels in parts of the country.

No big companies have yet pulled out from Monterrey but extra security measures have increased costs for some.

The Tecnologico de Monterrey university has also boosted security since two students died last March, caught in a gunfight between soldiers and gunmen on campus.

University authorities declined to comment but a Spanish exchange student told AFP that foreign student numbers were down by around 500, or 20 percent, this year.

Authorities face an uphill struggle, with many corrupt police who are often linked to drug gangs.

Nuevo Leon announced a record security budget for this year and aims to boost salaries and new recruits under a nationwide overhaul of policing.

Soldiers joined police patrols in January, after already provoking complaints from rights groups of abuses of power in Nuevo Leon.

But Domene said there was no alternative for now, blaming wide social divides for the problems.

"There are many young people without opportunities. They prefer to die living a few years at a false rhythm of wealth, opulence and power," he said.

"That's the biggest challenge we have because by fighting and shooting, it will never end."