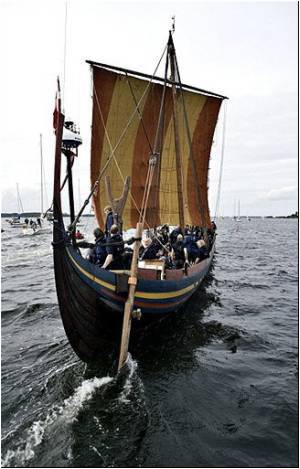 Maternal DNA from ancient Norsemen closely matches that of modern-day people in the North Atlantic isles, particularly from the Orkney and Shetland Islands.


The findings at the University of Oslo in Norway, which suggest that both Viking men and women sailed on the ships to colonize new lands, also challenge the popular conception of Vikings as glorified hoodlums with impressive seafaring skills.


Co-author Erika Hagelberg said that it overthrows this 19th century idea that the Vikings were just raiders and pillagers and they established settlements and grew crops, and trade was very, very important.

Vikings hold a special place in folklore as manly warriors who terrorized the coasts of France, England and Germany for three centuries, but the Vikings were much more than pirates and pillagers as they established far-flung trade routes, reached the shores of present-day America, settled in new lands and even founded the modern city of Dublin, which was called Dyfflin by the Vikings.

Some earlier genetic studies have suggested that Viking males traveled alone and then brought local women along when they settled in a new location, for instance, a 2001 study published in the American Journal of Human Genetics suggested that Norse men brought Gaelic women over when they colonized Iceland.

The findings were published in the journal Philosophical Transactions of the Royal Society B.

Scientists Believe That Viking 'Sunstone' of Norse Myth Did Exist
The Viking "sunstone" used to navigate the seas might have existed, according to evidence found by scientists.
READ MORE

Metabolic Genetics Research can Give Direction to New Treatments
Studying specific proteins and the genes that encode them could help scientists develop new drugs that directly target the faulty metabolic processes.
READ MORE