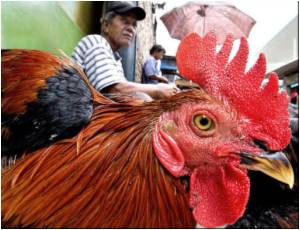 Bird flu has caused huge losses to chicken farmers in northern states of Nigeria.A senior Nigerian official said on Friday, that the farmers in the northern state of Kaduna have lost at least 65 million naira (about 500,000 U.S. dollars) to the outbreak of bird flu since the deadly virus of H5N1's epidemic prevailed in January.

Barnabas Dauda, chairman of the Kaduna State Chapter of the Poultry Association of Nigeria (PAN) said that the losses were mainly recorded due to spoilage and under-pricing. He said that the bird flu has more or less caused a major destruction of poultry industry in the country, including job losses. In his appeal to the Nigerian federal government he asked for assistance for the poultry farmers for re- stocking farms affected by bird flu and act as a guarantor to farmers in securing federal government's 50-billion naria (384 million U.S. dollars) loan facility.

13 of Nigeria's 36 states and the federal capital territory Abuja, have now confirmed the epidemic. No human case has been detected in the country yet. Nigeria is the first African country to report the presence of the H5N1 virus and has blamed illegal imports of poultry for the outbreak.


Poultry smuggling is a huge business and now poses a new threat, of the H5N1 bird flu. The virus experts say survive even in frozen meat, feathers, bones and even cages, though cooking can kill it. According to the Tribune, many experts are convinced that the illegal import of infected chicks introduced the virus into Nigeria, Which might have set off Africa's first and largest epidemic, which is limited to poultry farms and has not affected wild birds.