Compounds In Legume May Be Helpful In Treating Cancer

Researchers at Centre of Excellence for Integrative Legume Research (CILR) have screened legumes, the plants which obtain useable nitrogen from soil bacteria in their roots, for biological activity and they identified a number of compounds, which could potentially prevent the formation of a blood supply to tumours. Without an adequate blood supply tumours stop growing and ultimately can regress.

The CILR has lodged a complete patent application for compounds to treat cancer.

The research has attracted major international interest for intensive collaboration and joint development.


The discovery has resulted in a formal research collaboration which is currently underway with French "CSIRO-equivalent" Centre National de la Recherche Scientifique. Co-investment discussions are also in progress with a New Zealand company.

"Through UniQuest, Meristomics had immediate access to substantial commercial expertise and is looking to build on its patent success by attracting further funding to progress the research," Mr Harris said.

The anti-cancer molecules are produced by legumes during the early symbiotic relationship with soil bacteria known as rhizobia. Rhizobia induce legumes to form tiny new root organs called "root nodules." The bacteria live in the nodules and provide the plant with useable nitrogen it can convert into proteins.

"We have identified several compounds derived from the legume interaction with rhizobium bacteria that show strong anti-angiogenic activity.

"The CILR was formed in 2003 through the Australian Research Council (ARC) Centres of Excellence scheme to create the scale and focus required to build on existing research strengths through collaboration, and to be internationally competitive. 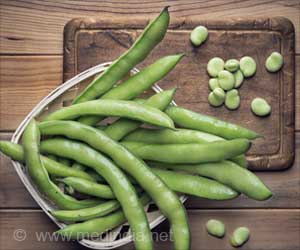 Health Benefits of Broad Beans
Broad beans or fava beans are a good source of protein and carbs. They are beneficial for heart and bone health, improve symptoms of anemia and aid in weight loss. Find out more about the health benefits of broad beans and how to enhance your diet with them.
READ MORE