Indole acetic acid is harmless to humans but when bits of IAA are added with an enzyme, toxic by products, which destroyed cancer cells without harming, healthy cells were produced.

By targeting only the cancerous cells, synthetic drugs based on IAA, called prodrugs, would be highly effective in killing the cancerous cells and would not produce side effects such as hair loss and nausea unlike conventional chemotherapy drugs.


Professor Peter Wardman, a scientist at the Gray Cancer Institute in south England, who was part of the research team, said fragmented molecule is released only within the tumour thereby killing only cancer cells and healthy cells are not harmed in anyway.

In laboratory studies if cell cultures Wardman and his colleagues used an enzyme called peroxidase, to trigger the release of the toxic-by-products of IAA to destroy tumours.

Early results show that the treatment, which has been patented by the CRC, killed 99% of the cancerous cells and with different types of cancers. Scientists said tests would now have to be done on animals and humans. 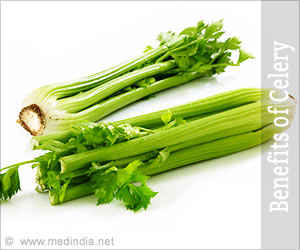 Benefits of Celery
Celery is a storehouse of goodness and health, which helps cure hangovers, improve sleep, reduce cholesterol, prevent cancer, remove kidney stones and does many more benefits to the body.
READ MORE