If advice is cheap, ART  assisted reproductive technology  is not, and the difference in cost has a significant effect on the treatments pursued by infertile couples in the United States.

Not surprisingly, an infertile couple's income makes a difference in whether they pursue an expensive technology such as in vitro fertilization, but income and insurance coverage also have a strong impact on whether they choose less costly options such as medication and surgery, according to a new study in the journal Health Services Research.


Income and insurance did not affect whether couples sought out a doctor's advice, the lowest-cost and least effective type of treatment, say J. Farley Ordovensky Staniec, Ph.D., of the University of the Pacific in Stockton, Calif., and Natalie Webb, Ph.D., of the Naval Postgraduate School in Monterey.


"For the 11 percent of women of childbearing age facing fertility problems and considering their options, money does matter," Staniec said.

The researchers looked at 1995 survey data from nearly 11,000 women, 1,210 of whom had fertility problems or were part of a couple with fertility problems. Of the 1,091 women ages 22 and older with problems, nearly six percent sought advice only from their doctors, 7 percent had fertility tests but no other treatment, 11 percent used drugs to induce ovulation but no other treatments, 3 percent had surgery and nearly 6 percent pursued treatments such as in vitro fertilization and related procedures.

By comparing these treatment options with information about the women's income and insurance, Staniec and Webb found that low-income women were only 65 percent as likely as their richer counterparts to seek help for infertility.

However, treatment costs influenced treatment choices for most women in the study, the researchers concluded. "For options beyond 'advice only,' income plays a significant role in all but the choice to use ovulation-inducing medications," Staniec said.

Insurance also played a role. When all other factors were held constant, women who were covered by private health insurance were 65 percent more likely to seek infertility help, "this despite the fact that many insurance plans do not cover infertility treatment," Staniec said.

Bryan Cowan, M.D., an infertility expert at the University of Mississippi Medical Center, said doctors sometimes get around the insurance requirements by treating women's infertility and reporting it as an unrelated gynecological problem.

Physicians may "change things to say they have pelvic adhesions, or pain from adhesions, but don't call it fertility treatment," Cowan said.

Although there were once racial differences in how often women sought infertility treatment, Staniec and Webb say the gap appears to be gone.

After taking into account income and insurance coverage, "minorities are no less likely to seek infertility services than are whites, implying that financial access is the most serious barrier to seeking and receiving treatment," the researchers say. 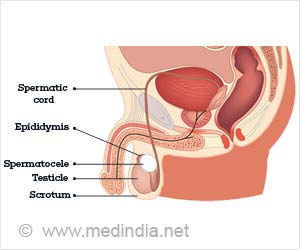 Spermatocele
Spermatocele is a condition in which there is a blockage in the epididymal duct, resulting in semen collection and formation of a cyst.
READ MORE