Mature muscle fibers, rather than their less-developed neighbors, are the tissues that turn malignant in a soft-tissue cancerthat strikes children and teens, researchers at UT Southwestern Medical Center and Children's Medical Center Dallas have found.

The research, performed in fruit flies, not only provides a clue to how the cancer arises, but also means that scientists can use the flies to search for other genes involved in the cancer.


"Never before has any animal model system shown that new cells can be generated from differentiated skeletal muscle," said Dr. Rene Galindo, lead author of the study, assistant professor of pathology at UT Southwestern and a pediatric pathologist at Children's.


"Skeletal muscle had been viewed as being biologically fixed," he said. The research is available online and is being published in the Sept. 5 issue of the Proceedings of the National Academy of Sciences.

The disease starts when one of two genes, called PAX3 and PAX7, fuses with another gene called FKHR, or "Forkhead."

Scientists, however, had not known which type of tissue turned into tumor cells: mature muscle cells or the more immature cells that surround or form them. The question arose partly because of the number of nuclei found in each cell.

The researchers used larvae of the fruit fly Drosophila and genetically engineered them to contain human PAX-FKHR gene complexes. The scientists used the insect because its muscles are easily visible through its outer shell. The genes were linked with another gene that made cells glow green if the PAX-FKHR genes were active.

They examined flies with both the PAX7-FKHR complex and PAX3-FKHR complex. Both gene complexes created fatal conditions similar to alveolar rhabdomyosarcoma. For technical reasons, the researchers then focused on PAX7-FKHR, and saw new cells arising from the fully developed muscle tissue. They also saw tumor cells in the larvae's blood, central nervous system and other locations, indicating that the cells had broken free and metastasized.

Because human and fly genes are nearly identical, it should be possible to test for other genes involved in the cancer by knocking them out, then seeing if that deletion blocks the creation of the cancer.

"We can test virtually every gene in the fly genome," Dr. Galindo said.

"There has been little progress toward developing effective therapies for rhabdomyosarcoma, in part because of the lack of animal models for the disease," said Dr. Eric Olson, chairman of molecular biology at UT Southwestern and the study's senior author. "This work is important because it provides a simple organism, the fruit fly, as a model for analyzing the genetic causes of rhabdomyosarcoma."

"Second, it reveals a fascinating biological process in which a human gene for rhabdomyosarcoma causes skeletal muscle fibers to undergo a reverse form of development and generate single cells that spread through the organism," said Dr. Olson, director of the Nancy B. and Jake L. Hamon Center for Basic Research in Cancer and director of the Nearburg Family Center for Basic Research in Pediatric Oncology. 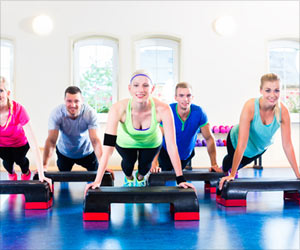 Starchy Snacks After Meals May Up Risk of Heart Disease

Measles Vaccine Offers Protection Against The COVID-19 Pandemic
View all