The reasons for baldness and why some people are hairier than others may have been discovered, according to British scientists.

The molecular mechanisms that determine which embryonic skin cells will form into hair follicles, deciding the body's hair pattern has been discovered by the team at the University of Manchester.


This study on mice will be of use in the study of ectodermal dysplasia -- a range of conditions in which skin cells fail to develop into other tissue, including hair follicles and to the scientists looking at male-pattern baldness.


"During human development, skin cells have the ability to turn into other types of cells to form hair follicles, sweat glands, teeth and nails," said Dr. Denis Headon, who led the research. "Which cells are transformed into hair follicles is determined by three proteins that are produced by our genes."

"Our research has identified how one of these proteins working outside of the cell interacts at a molecular level to determine an individual's hair pattern as the embryonic skin spatially organizes itself," said the researcher.

According to the team, cells that are given a genetic instruction to become hair follicles send out signals to the nearby cells, inhibiting them from doing the same and thus produce a specific hair pattern.

"The research, while not directly linked to male-pattern baldness, should be of interest to pharmaceutical companies working in this field as understanding the molecular processes at work during follicle development could provide clues as to why follicles shrink and hair growth diminishes in certain men as they get older," Headon said. 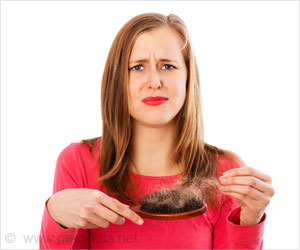 Surprising Relationship between Scalp Tattoos and Baldness
Whats a scalp tattoo? Is it a cure for baldness in both men and women? Is it safe? Read on to get answers to all your questions on scalp tattoo.
READ MORE