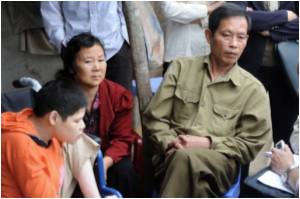 A Vietnamese court sentenced a cosmetic surgeon to 19 years in jail for throwing the body of a patient into a river who died during a botched operation.

Le Thi Thanh Huyen, 37, died in October 2013 after undergoing liposuction and a breast augmentation operation at the private Cat Tuong Clinic in Hanoi, despite efforts by the centre's staff to revive her.

Nguyen Van Thao opens a fridge and pulls out a bag of bloody foetuses to prepare for burial at a small Hanoi cemetery - a grim reminder that Vietnam has one of the highest abortion rates in the world.
Advertisement

Police said doctor Nguyen Manh Tuong dumped her body in the Vietnamese capital's main river, with the help of a clinic security guard.


Her headless corpse was pulled from the river in July this year and identified by DNA tests.

Tuong was jailed for "violating regulations of medical care" and mistreating the body of the victim, the court heard.

Two Nigerians who were isolated in Vietnam after arriving in the country from West Africa with symptoms of fever have been released.
Advertisement
"I feel remorse, I repent and I want to apologise to the family of the victim," the doctor told the court.

The clinic had a business licence but no permit to carry out cosmetic surgery. It has since been shut down.

The victim's husband did not know she was undergoing a surgical procedure but found a receipt for the appointment while searching her belongings after she failed to return home, state media reported.

Tuong and the security guard were arrested shortly after, in October 2013.

The security guard was sentenced Friday to 33 months in jail for theft -- of the mobile phone of the victim -- and mistreating the body.

Although no official statistics are available, media reports suggest the number of Vietnamese women undergoing procedures such as breast augmentation and facelifts has increased significantly in recent years as a new generation of body conscious and wealthy women turn to clinics for help.

Many doctors at state-run hospitals also run unlicenced private clinics or offer treatment from their homes.

Myanmar and Vietnam are testing 3 patients for the deadly Ebola virus after they arrived in the Southeast Asian nations from Africa suffering fever, health officials said.
Advertisement
Advertisement

Nail biting can occur as a result of anxiety, boredom, or imitating others. It is usually observed in ...
This site uses cookies to deliver our services.By using our site, you acknowledge that you have read and understand our Cookie Policy, Privacy Policy, and our Terms of Use  Ok, Got it. Close
×