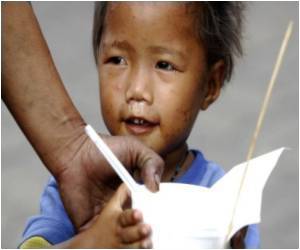 The state-run Vietnam News Agency said this meant more than three million children under the age of five in the communist country of 86 million people were malnourished, underweight or suffered from growth deficiencies.


Vietnam's mountainous areas are home to many of the country's ethnic minority groups and suffer from high levels of poverty.

High rates of child malnutrition not only hinder the development of the children themselves, but also affect "the potential of economic and social development in general," in Vietnam, Tien said.

Acute child malnutrition is taking its toll on Nepal's children who are wasting away or dying in large numbers.
Advertisement
"At the same time, urban areas are facing the problem of childhood obesity. The situation requires quick action so we don't make the same mistakes as other middle-income countries," he added.

The study by the National Institute of Nutrition was based on research in 2009 and 2010.

Childhood obesity rates have seen a six-fold rise since 2006 and now run at up to 15 percent in wealthier urban areas including the capital Hanoi and southern Ho Chi Minh City, according to the survey of more than 37,000 people.

Risk of Stunting in 450 Million Children Due to Malnutrition

Within 15 years about 450 million children will be physically and mentally stunted if the world neglects action to tackle malnutrition, warned a report from Save the Children .
Advertisement
<< Millions To Observe 'Yogathon' To Mark World Health Day
World's Quietest Room >>

Drug Interaction Checker Indian Medical Journals Diaphragmatic Hernia Color Blindness Calculator Post-Nasal Drip Sanatogen Sinopril (2mg) (Lacidipine) Iron Intake Calculator Calculate Ideal Weight for Infants The Essence of Yoga
This site uses cookies to deliver our services. By using our site, you acknowledge that you have read and understand our Cookie Policy, Privacy Policy, and our Terms of Use