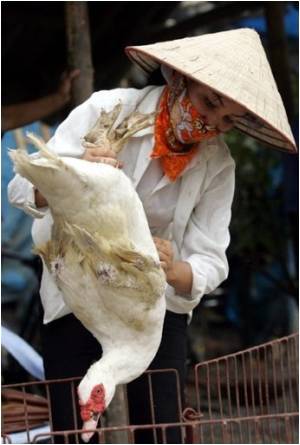 Vietnam is still struggling with new cases of the disease even though they have successfully contained the fatal bird flu outbreak that raged in the late 2000s.

Since January, bird flu outbreaks have occurred in 14 provinces. About 65,000 chicken and ducks have died or been culled. Authorities have confirmed four human cases, of which two have been fatal.

It's a long way from the peak in 2003 to 2009 when the virus infected millions of fowl and killed 57 people -- making Vietnam the second worst-hit country after Indonesia, according to the World Health Organization.


In 2011, the country reported no new human cases, but the virus was still there, less threatening but not eradicated.

"Bird flu has a harmful impact on agriculture, on people's lives, with the reappearance of new weaker strains," said Hoang Van Nam, director of the animal health department at the agriculture ministry.

Influenza (or rather, the flu) is a cold weather infectious condition that affects the young and old alike. Though most reported cases are mild, the flu can sometimes cause severe and life-threatening complications in both children and adults, thanks to wrong medications and improper vaccinations. Learn more about the disease from our Flu Quiz and guard yourself and your family from a poss
Advertisement
Outbreaks happen nationwide, he said, adding this was due to a mix of "the family structure of farming, a lack of information and gaps in vaccination and farm control programs."

Concerns about avian influenza have risen in the region with China, Cambodia and Indonesia all reporting deaths from the H5N1 strain of the virus this year.

But traders at Hanoi's Ha Vi market, where between 80 and 100 tonnes of live birds are sold every day, say they are not concerned.

"Who said there is a bird flu epidemic here? This doesn't interest me. They exaggerate these things. I know only that all my chickens are in good health," market vendor Do Thi Thanh Hoa told AFP.

She said neither she nor her colleagues had to provide certificates of origin or vaccination for the birds they sell.

"Since the market opened, no one has been infected with H5N1. In this market, even when there is a ban, we still buy chickens and eat meat. Everyone is fine," said Dao Thi Ngoc, another farmer.

"The TV keeps talking about H5N1. Where is it happening?".

State television regularly runs reports on the dangers of transporting poultry that has not been vaccinated, warning of the risks of buying birds smuggled in from China.

But in a country where humans and fowl live side by side and where small, family-owned units dominate poultry production, it is almost impossible to monitor every bird slaughtered and sold.

"There are too many small farms. You can't control all the cullings. Sometimes, hygiene standards are neglected, sometimes they're abandoned," said Can Xuan Binh, director of animal health services in Hanoi.

As it does every year, the government has been trying to promote better disinfection of contaminated farms, vaccination programs and mass culls to keep a lid on H5N1 outbreaks.

But despite such efforts, officials have struggled to control the transportation and sale of live birds -- one of the key drivers of the spread of the disease.

And to add to their problems, experts have identified new strains of the virus in certain Vietnamese provinces that are proving resistant to the usual vaccine.

"The vaccine is no longer effective. The capacity for protection is henceforth limited," said Hoang Van Nam, adding up to 100 million doses of a new type of vaccine will soon have to be imported from China.

Some experts blame Vietnam's lingering H5N1 problem on political incoherence which, they say, undermines overall efforts to bring the crisis under control.

"When the epidemic explodes, they fight it. When it disappears, they stop," said one vet who asked not to be named, and is convinced that "the risks for humans are important."

The virus typically spreads from birds to humans through direct contact, but experts fear it could mutate into a form that is easily transmissible between humans, with the potential to kill millions in a pandemic.

Vietnam earlier in March approved a new $23 million fund to tackle the virus, with an emphasis on improving coordination between officials in the health and agricultural sectors.

But Patrice Gautier, a French vet who has been based in Vietnam for years, said that the virus, by its very nature, will take a long time to eradicate.

"This problem doesn't go away if you just throw money at it. It will take a long, hard slog to reinforce vet services," said Gautier, a bird flu expert.

According to him, Vietnam's animal health services have started to follow the recommendations of the World Organization for Animal Health to address weaknesses diagnosed at the height of the outbreak.

"It is very unlikely that you will see a new crisis emerging in Vietnam," he said. "But it is very likely that the current situation, with a peak every winter, will persist for decades."