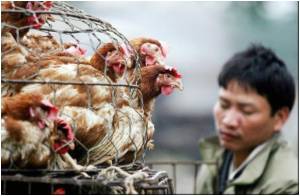 The government of Vietnam has approved a new fund of 23-million-dollar to fight bird flu, the health ministry said.

The fund, made up of 13 million dollars of aid and 10 million dollars in loans from donors, aims to improve co-ordination between officials in the health and agricultural sectors, according to the ministry's website.

"Bird flu broke out again this year with complex and unpredictable signs," it quoted Deputy Minister of Health Nguyen Thanh Long as saying.


"There is currently no vaccine or effective drugs to treat people who have picked up bird flu," he said.

The ministry will upgrade its preventive medicine systems and explore new treatment to prevent the spread of the disease to humans, he said, adding that it was the ministry's top priority.
Advertisement
Since 2003, bird flu outbreaks have killed or led to the forced culling of millions of fowl in Vietnam, which is among the countries most affected by the H5N1 virus in southeast Asia.

The World Health Organization has officially confirmed 61 deaths from the disease in Vietnam.

Bird Flu More Common, Less Lethal Than Thought: Study
Bird flu is believed to be a rare disease that kills more than half of the people it infects, but a ...

Bird Flu Studies is Best Kept a Secret
Bird flu studies will be published only after the WHO receives a green signal from scientists about ...