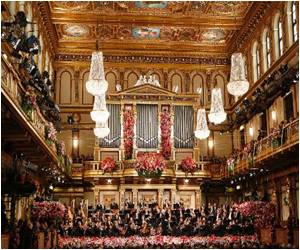 Marie-Antoinette's summer childhood home and the beautiful and tragic Sissi's favoured residence was the Schoenbrunn Palace.

Mozart performed there as a child and Napoleon was so smitten he moved in - twice.

Vienna is undergoing a luxury facelift that is delighting Arab, Asian and Russian tourists, as well as locals with half a dozen new five-star hotels, flagship stores for Louis Vuitton, Prada and Emporio Armani.
Advertisement

And from April 30, tourists too can sojourn in Vienna's top tourist site, in a converted suite of rooms with views over the palace gardens, even with butler, cook and horse-drawn conveyance.


"This is unique in Europe," Birgit Reitbauer from the Verkehrsbuero Austrian hotel group behind the Schoenbrunn Palace Suite told AFP during a sneak preview.

Musicians from Vienna transformed the fresh goods in a Madrid market into honking, whistling instruments with a pumpkin for a drum, carrots for flutes and turnips for trumpets.
Advertisement
The new suite is above the former bed chamber of the bushy-whiskered Emperor Franz Joseph and the study where his independent-minded wife "Sissi" -- assassinated in 1898 -- would write poems and her diary.

Built as an answer to Versailles in France, Schoenbrunn and its gardens -- home to the world's oldest surviving zoo -- are a UNESCO world heritage site, attracting eight million visitors per year.

Its Napoleon Room was where the French dictator -- who ditched his Josephine to marry a Habsburg princess -- slept after occupying Vienna in 1805 and in 1809 and making Schoenbrunn his headquarters.

Elsewhere a six-year-old Mozart played for Empress Maria Theresa in the 1760s, while the Blue Chinese Salon was where Emperor Charles I in 1918 signed the document that ended 640 years of Habsburg dominion.

The suite is believed to have been the private apartments of Franz-Joseph's grand-daughter, "Red Archduchess" Elisabeth, born a princess in 1883 and who died a socialist in 1963.

In keeping with Maria Theresa, mum of guillotined "let them eat cake" Marie Antoinette, it has gushings of white, black and gold, combined with the imperial "pineapple damask" red cloth.

Unlike in Schoenbrunn's heyday, however, there are modern conveniences like three widescreen televisions, and elegant stucco work and chandeliers are mixed with a more modern touch.

"It was important for us to maintain the imperial flair of Schoenbrunn Palace ... without having to omit any modern elements," explained Franz Sattlecker, who oversees rentals at the site.

The experience of waking up in a 1,441-room palace like a pampered princess in a four-poster bed is not for paupers, however.

Prices per night start at 699 euros per person, not including breakfast. For that you have to go over to the nearby Parkhotel where check-in happens, or make your own.

The "Honeymoon Package", at 2,700 euros, gets newlyweds a carriage ride from the four-star Parkhotel, roses, champagne, something called a "romantic bath" -- and breakfast.

Top of the range though is the "Imperial Suite Package" with dinner rustled up by a private chef, a private tour of the whole palace and other goodies -- all for 4,900 euros per night.

The main targets are wealthy tourists who flock to Vienna from Russia, China, India and Japan, looking for something special, as well as well-heeled Europeans and Americans.

"Many Japanese people come to Vienna to renew their vows and have beautiful photos and memories, and we hope we can attract some of them," Reitbauer explained.

"Surprisingly, however, our first bookings are actually people from Vienna."

When the Vienna Philharmonic kicks off 2013 with its traditional New Year's Concert on January 1st, Wagner, Verdi and a myriad of waltzes will broadcast live to 81 countries.
Advertisement
<< Patterns of Patient Care Examined in Medicare Accountable C...
Memory and Thinking Decline Indicated by Narrowing of Neck ... >>

In the latest high-profile restitution case in Austria, Vienna's Philharmonic Orchestra said that it was returning a painting that was stolen by the Nazis to the descendants of its rightful owners.
Advertisement
News A-Z
A B C D E F G H I J K L M N O P Q R S T U V W X Y Z
What's New on Medindia