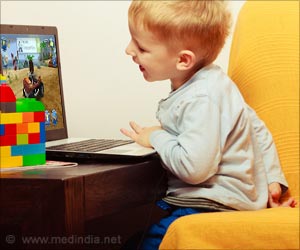 Playing video games is one among the favorite leisure-time activity for any school-going kid. But, can it do any good?

A study by researchers at Columbia Mailman School of Public Health assessed the association between the amount of time spent playing video games and children's mental health and cognitive and social skills and found that playing video games may have positive effects on young children.


‘Video game playing is often a collaborative leisure time activity for school-aged children and improves cognitive skills when limited to 5 hours per week.’


There were no significant associations with any child self-reported or mother- or teacher-reported mental health problems. The researchers also found that more video game playing was associated with less relationship problems with their peers.

Based on parent reporting, one in five children played video games more than 5 hours per week. Researcher Katherine M. Keyes said that video game playing is often a collaborative leisure time activity for school-aged children. These results indicate that children who frequently play video games may be socially cohesive with peers and integrated into the school community. He added that they cautioned against over interpretation, however, as setting limits on screen usage remains and important component of parental responsibility as an overall strategy for student success.

Can You Cope with Your Childrens Tantrums?
It is natural for children to throw tantrums, but how parents react to such situations makes all the difference in the life of a family.
READ MORE