Vice President M Venkaiah Naidu launched the 'Bharatiya Poshan Anthem' in New Delhi, which aims towards taking the message of making India malnutrition free to all corners of the country. 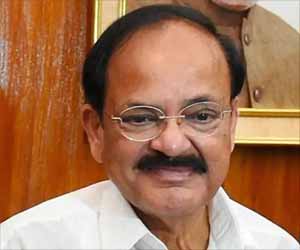 The anthem has been composed and sung by noted singer and composer Shankar Mahadevan while the lyrics have been helmed by Prasoon Joshi.

Speaking on the occasion, Naidu said: "The aim of the POSHAN Anthem is to inspire people to join the movement to fight the scourge of malnutrition."

He also opined that "the anthem may be sung in as many regional languages as possible so that it becomes a song of the people. The overriding priority of all legislators, administrators, civil society activists, and citizens must be to ensure that all children of the country get the best possible childhood."

The Vice President of India congratulated both artists and hoped that through this song, the message of nutrition would reach each and every corner of the country.

Hailing the 1.3 million Anganwadi workers in the country as the "nutrition warriors and change agents," the Vice President said that "the song will lead to a nutrition revolution to transform India into a malnutrition free country by 2022."

He also appreciated the efforts of the Ministry of Women and Child Development for using innovative tools to take the message of nutrition to all citizens of India.

Kwashiorkor is caused by severe protein malnutrition and is characterized by collection of fluid (edema) in the legs and belly. Kwashiorkor can be prevented by consuming a nutritious diet.

Malnutrition refers to imbalances in a person's intake of energy or nutrients and can occur due to an excess consumption of nutrients or a lack of nutrients.

Marasmus is a severe potentially life threatening form of malnutrition caused by a diet deficient in calories and proteins. There is significant wasting of fats, muscles, and tissues of the body leading to a "skin and bones" appearance.

According to Ayurvedic science the root cause of any disease is the accumulation of toxic substances in the body. The toxic accumulation depletes the cells of its oxygen, energy and promotes ill heath.

Asparagus is a vegetable packed with nutrients and vitamins that are essential for our body. Asparagus has numerous health benefits that are important for overall health.

Peanut Butter is a superfood with many health benefits and is very popular food among the kids. You can make peanut butter at home or buy it in supermarkets.

The Zone Diet is a weight loss program with a 40:30:30 plan for carbohydrates, fats and proteins respectively.