Version of "The Scream" to be Displayed in New York 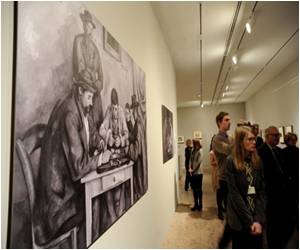 A version of the "The Scream" by Edvard Munch will be displayed at the Museum of Modern Art in New York next month for six months, said the museum.

There are actually four versions of the Norwegian Expressionist's work, which shows a human figure with a horrified facial expression and hands held to his head, all against a landscape with a turbulent orange sky.

It has become a universal symbol of fear and anguish.


The one bound for New York, done in pastel in 1895, is the only one held in private hands. The other three are in Norwegian museums.

It was auctioned in May for a record $119.9 million dollars by Sotheby's. Financier Leon Black has been cited as the possible buyer, but this was never confirmed.

Officials said that a criminal complaint was lodged by Prince William and his wife Catherine with French prosecutors over topless photos of Catherine published in a gossip magazine.
Advertisement
The display begins on October 24 and will feature other works by Munch from the same period.

This particular version of The Scream is the most colorful of the four.

The auction of it on May 2 in New York was nothing short of a thriller.

The starting price was $80 million, and bids went up by millions of dollars per minute. It was all over in 12 minutes. The final price was the highest ever fetched for a painting at auction.

Security at the museum will be beefed up for this show. Versions of the painting have been stolen in Norway in 1994 and again in 2004.

Blood Pressure Calculator Noscaphene (Noscapine) Sinopril (2mg) (Lacidipine) Loram (2 mg) (Lorazepam) Drug Side Effects Calculator Drug - Food Interactions The Essence of Yoga Turmeric Powder - Health Benefits, Uses & Side Effects Find a Hospital Accident and Trauma Care
This site uses cookies to deliver our services. By using our site, you acknowledge that you have read and understand our Cookie Policy, Privacy Policy, and our Terms of Use