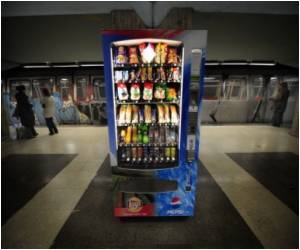 A new study has revealed that school children who eat foods purchased in vending machines are prone to chronic health problems.

University of Michigan Medical School researchers have suggested that such food is responsible for poor diet quality that may be associated with being overweight, obese or at risk of health problems like diabetes and coronary artery disease.

The study also looked at foods sold in school stores, snack bars and other related sales that compete with USDA lunch program offerings and found that these pose the same health and diet risks in school-aged children.


"The foods that children are exposed to early on in life influence the pattern for their eating habits as adults," said Madhuri Kakaralaof the U-M Medical School.

Three-Quarters of Parents Bribe Kids With Junk Food to Keep Them Busy in the Car: Survey

Almost three-quarters of parents bribe their children with sweets and treats to stop them whining in the car through long journeys, according to a UK survey.
Advertisement
Researchers analysed data from 2,309 children in grades 1 through 12 from schools across the country. Interviewers administered questionnaires to obtain 24-hour food intake data on a given school day. Second-day food intake data was obtained from a group of students to account for day-to-day usual intakes.

Among those surveyed, 22 percent of school children consumed competitive or vended food items in a school day.

Usage was highest in high school, where 88 percent of schools had vending machines, compared to 52 percent of middle schools and 16 percent of elementary schools.

"Childhood obesity, resulting from poor dietary choices, such as those found in this study, greatly increases the risk for many chronic diseases. A healthy school food environment can reduce these dietary risks," said Kakarala.

The findings appeared in the Journal of School Health.

Healthy Snacks You Should Keep at Your Desk at Work

More News on:
Diet Guidelines for Healthy Snacking Health Insurance - India Healthy Snacks You Should Keep at Your Desk at Work

Selfie Addiction Calculator Calculate Ideal Weight for Infants Blood - Sugar Chart Turmeric Powder - Health Benefits, Uses & Side Effects The Essence of Yoga Nutam (400mg) (Piracetam) Blood Donation - Recipients Vent Forte (Theophylline) Accident and Trauma Care Post-Nasal Drip
This site uses cookies to deliver our services.By using our site, you acknowledge that you have read and understand our Cookie Policy, Privacy Policy, and our Terms of Use  Ok, Got it. Close
×