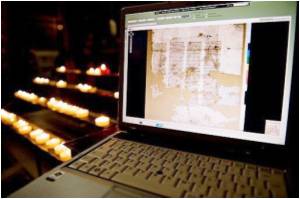 Through a website set up by the Vatican and Oxford University, a treasure trove of ancient bibles and rare Greek and Hebrew texts are being made available to the public.

A priceless 1455 copy of the Gutenberg Bible -- the first major book to be printed with movable type in the West and one of fewer than 50 surviving copies -- went online Tuesday in the first stage of the project between the Biblioteca Apostolica Vaticana (BAV) and Oxford's Bodleian library.

The four-year project, funded by the Polonsky Foundation, will eventually create an online archive of 1.5 million pages, the Vatican said in a statement.


One third of the fragile manuscripts will come from the Bodleian, which is one of Europe's oldest libraries, and the other two-thirds from the Holy See's collection.
Advertisement
The website, http://bav.bodeian.ox.ac.uk, includes video presentations by Vatican archivist Archbishop Jean-Louis Brugues and the Archbishop of Canterbury, Justin Welby.

Texts already online include a 1490 Italian bible with lavish illustrations, translated by a Camaldolese monk, and a 1479 Cologne bible with hand-painted colour woodcuts of the Creation scene said to have influenced all subsequent production across Europe.

Works by Plato, Homer and Sophocles are to make it onto the website over the next three years.

Curators have had to weigh up the importance of sharing the texts against their physical condition in order to minimise the risk of damage during digitisation, the Vatican said.

Enthusiastic scholars across the globe can make special requests to get particular works uploaded onto the website.

With over 11 million printed works and 55,000 digital journals, the Bodleian library is the second biggest in Britain, after the British library.

First Lunar Bible Up for Auction
First bible on the moon, along with Neil Armstrong's glove and a typed letter are set to be ......