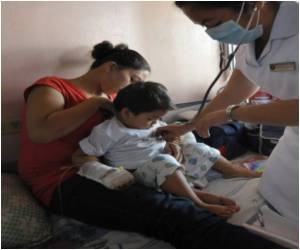 Josianna Napuat barely flinched when Elizabeth William, a registered nurse injected her with a measles vaccine outside her home in Vanuatu's capital Port Vila.

The seven-year-old's face then lit up when William gave her a pink bar of soap with which to wash her hands. "I think it's important," said Josianna's mother Mollie, 35, of the visit by UNICEF a week after a cyclone blasted through her neighborhood and tore off part of the roof of her home. "We've just had a storm and if there's an outbreak (of disease), it'll affect the kids."

There were more than 1,900 Arctic cyclones every year between 2000 and 2010, over 40 percent more than previously thought.
Advertisement

Severe Tropical Cyclone Pam, a maximum category five storm, destroyed homes and crops and contaminated water supplies in the Pacific archipelago when it hit on March 13, increasing the risk of the spread of infectious and water-borne diseases. Since then, teams have been working to vaccinate hundreds of children aged between six months and five years in the capital, where thousands lost everything in the storm.


"In almost all post-disaster situations, there will be a move to quickly vaccinate against measles," Dr.Colin Macleod, an infectious disease specialist from the London School of Hygiene and Tropical Medicine, told AFP in Port Vila. "That's especially in developing countries where it's not expected that vaccination rates will be as high as in the West. And there's other things like cholera which can spread very quickly, especially for people in close proximity."

Countless have had to bear the burden of cyclone Thane in the coastal regions of Tamil Nadu which has left them impoverished by the calamity.
Advertisement
Crowded conditions

Many are living in crowded conditions, with the loss of shelter for a large part of the population forcing families to share rooms with relatives or remain at evacuation centres, the latter of which are home to some 4,000 people in Port Vila alone.

Paul Alexander Hetyey, the principal of Central School in Port Vila, said the loss of crops -- predominantly vegetables, roots and fruits like tapioca, manioc, taro and banana -- also meant children were going hungry or suffering a poor diet. In some villages, locals told AFP this week they were eating only rice after finishing the last remaining crops.

"Their diet will change," said Hetyey. "(The local crops) are rich in vitamins and minerals but it will be a couple of months before they start growing again. So I'm also worried about the kids not getting enough vitamins. When they are not getting enough vitamins, of course their immune systems break down and they are more likely to catch things."

An estimated 82,000 children were affected by the cyclone, according to UNICEF, with some expected to show signs of emotional trauma.

Barbara Kolucki, an expert on children's mental health at the agency, said Vanuatu-specific data was still being gathered. But she said the range of issues seen in post-disaster situations included a fear of water, children fearful of sleeping or of leaving their parents to go to school, and behavioral problems.

Sylvie Mael, 19, a biology and mathematics student from the University of the South Pacific in Port Vila said she had struggled to sleep at night since the cyclone, with concerns about her family and relatives playing on her mind.

"I sit up and read," Mael told AFP as she watched her friends play volleyball in a field, adding that she preferred fiction books "to get my mind off the stress".

Schools have been closed for two weeks to help the nation get back on its feet, with 500 of them estimated to be damaged by the cyclone, according to the UN's Office for the Coordination of Humanitarian Affairs (OCHA).

Hetyey believes their reopening will help children restore a sense of normality.

"As a principal, I have to get the kids back into a normal situation as soon as possible with routines and play, and a chance to express their experiences and work their trauma off," he said.

Charlyn Silas said she missed going to classes and feared the money needed to repair her sister's home in Port Vila, where she lived, might leave little for her education.