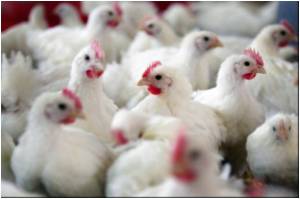 The Kansas State University's vaccine development method is expected to help researchers make vaccines for emerging strains of avian influenza more quickly, which could reduce the number and intensity of large-scale outbreaks at poultry farms as well as curb human transmission.

The new study has detailed vaccine development for two new strains of avian influenza that can be transmitted from poultry to humans.

Since April 20, more than 20,000 birds have been culled in the poultry farm at the Indian Council of Agricultural Research after bird flu outbreak in Manipur.
Advertisement

It also may lead to new influenza vaccines for pigs, and novel vaccines for sheep and other livestock, said researcher Jurgen Richt.


Richt and his colleagues focused on the avian influenza virus subtype H5N1, a new strain most active in Indonesia, Egypt and other Southeast Asian and North African countries. H5N1 also has been documented in wild birds in the U.S., though in fewer numbers.

Since December 2014, cases of the highly pathogenic H5 avian influenza virus have spread through 16 states in the midwestern and western parts of US.
Advertisement
H5N1 is a zoonotic pathogen, which means that it is transmitted from chickens to humans, Richt noted, adding that so far it has infected more than 700 people worldwide and has killed about 60% of them. Unfortunately, it has a pretty high mortality rate.

Researchers also looked at the avian flu subtype H7N9, an emerging zoonotic strain that has been circulating in China since 2013. China has reported about 650 cases in humans and Canada has reported two cases in people returning from China. About 230 people have died from H7N9.

The study is published in Journal of Virology.

Poultry industry is on high alert after bird culling began at the Indian Council of Agriculture Research on April 20. It is expected to go on for two days.
Advertisement
Advertisement