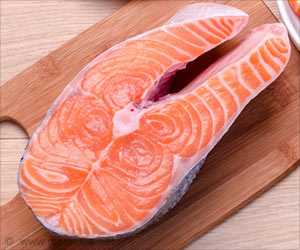 The US Food and Drug Administration has finally approved the first genetically modified animal, salmon for human consumption. After a long battle for many years, the Aqua-Bounty Technologies finally heave a sigh of relief with its approval.

Aqua-Bounty Technologies grow fish in tanks in Canada and Panama. The company has modified the gene to increase the salmon yield and fulfill the growing demand for it across the USA.

Salmon's Growth gene is only active for a particular period and the company has genetically modified it by incorporating a growth hormone gene from the Chinook salmon and a genetic switch from the ocean pout, an eel-like creature. Therefore, this hormone can now keep the transplanted gene active all the time.


The genetically modified salmon (GMO) can grow in about 18 to 20 months compared to the normal ones that take around 28 to 36 months. The GMO salmon will also require 25% less feed.

Farmed Norwegian salmon can be safely eaten even by pregnant women.
Advertisement
The FDA has approved the GMO salmon as safe for human consumption as it has the color, odor and taste similar to that of the farmed salmon. The company has said that it will take two more years for the GMO salmon to hit the US markets.

"The F.D.A. has thoroughly analyzed and evaluated the data and information submitted by AquaBounty regarding the AquAdvantage salmon and determined that they have met the regulatory requirements for approval, including that food from the fish is safe to eat," the company said in a statement.

The company has also said that the GMO salmon will not be labelled as "Genetically Modified" as it applies to the GMO plants. But the lack of labeling seems to be a matter of concern for many people. FDA has reported that the modified gene has been a part of the salmon for many generations and it does not pose any risks.

90% of Americans surveyed in opinion polls favor labeling GMO foods and more than 200,000 people have signed its online petition against the DARK Act so far.
Advertisement

All healthy foods will give you great skin, but some of them are better than others for a glowing face and ...
This site uses cookies to deliver our services.By using our site, you acknowledge that you have read and understand our Cookie Policy, Privacy Policy, and our Terms of Use  Ok, Got it. Close
×