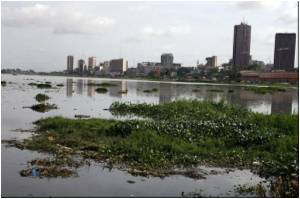 A product developed by Nualgi Nano Biotech (NNB), a low profile biotech company here, is helping Americans to clean up polluted lakes with the help of reverse technology transfer.

A three-acre Duck Pond in Croton-On-Hudson in New York state has been restored to normal health thanks to 'Nualgi' - an invention by NNB founder Thothathri Sampathkumar.

Victims of water pollution in army camp in the US are pouring out their tales of woe to a Senate Committee.
Advertisement

Prior to the application of Nualgi in Aug 2011, the Duck Pond "was in a highly impaired state with a variety of water quality issues" such as bad odour, poor clarity and infestation with duck weed and algae, said John Tucci, president of Lake Savers, a small company in Richland, Michigan.


Lake Savers, which has about 2,000 acres of lakes and ponds, including the Duck Pond, under its management, uses a combination of oxygenation systems, beneficial bacteria and enzyme formulations in its restoration projects. According to Tucci, this however did not work well in extremely impaired water bodies like the Duck Pond and so the company wanted to assess whether the addition of Nualgi to its programme could speed up recovery of this water body. The US company obtained 50 kg of Nualgi from Sampathkumar in August 2011 to try it out.

Swiss researchers have found that the artificial sweetener acesulfame passes through our body into wastewater, survives treatment and accumulates in groundwater, which may help track
Advertisement
In an email to the Bangalore company earlier this month, Tucci has acknowledged that the water quality in the pond showed a "remarkable and sustained improvement" after a single dose of Nualgi application. Duckweed disappeared in one month after application and did not come back till now, and no algae blooms either, while "fish productivity and health has improved dramatically with the pond becoming a favourite destination for local fisherman," he said.

Nualgi is a mix of micro nutrients in the form of nano particles including silica, iron and manganese, which triggers the rapid growth of a type of algae called diatoms, explained Mallimadugula Bhaskar, a collaborator of Sampathkumar. The oxygen released by diatoms through photosynthesis increases the dissolved oxygen level of water and thus keeps the pond clean and the diatoms converted into 'zooplanktons' provide food for the fish. One kilogram of Nualgi can treat four million litres of water, he said. Apart from India, Nualgi has been patented in the US, Britain, Germany and South Africa.

Encouraged by its successful experiment in Duck Pond, Lake Savers has obtained clearance from the US Environmental Protection Agency for using Nualgi on a large scale in the US. "We are now aggressively embarking on more intensive studies and applications of Nualgi in a variety of water bodies from 5 to 120 acres," Tucci said. The Lake Savers which has so far purchased 350 kg of Nualgi, has expressed intent to buy another one tonne this year, Bhaskar said.

According to Bhaskar, Nualgi is an economical alternative to treat sewage and organic wastes in "eutrophic" lakes and ponds as no skilled labor or energy is required. It is inexpensive and can be mass produced, he said.

An eutrophic lake is characterized by excessive growth of algae resulting from contamination by nitrogen or phosphorus compounds such as by laundry detergents, untreated sewage, and fertilizer run-off from agricultural land. "One obvious solution is to reduce these inputs but this is unrealistic," Bhaskar said, adding: "The other solution is to remove the nutrients from water. The Nualgi-diatom-zooplankton-fish food chain is the best way to achieve this. Thus all the polluted lakes and rivers can be restored to their original glory using Nualgi."

According to Bhaskar, Nualgi is being used in many lakes in southern India for the past seven years and fishermen are buying the product to increase their catch in water bodies. "In Delhi only 30 per cent of the sewage of about four billion litres is treated," Bhaskar told IANS. "If Nualgi is used, this can become 100 percent in one year without any capital expenditure."

It is likely that Nualgi will be effective in oceans too, Sampathkumar said, adding it can be used to prevent algae bloom, known as red tide, like the one a week ago that reportedly killed nearly one million fish in the Gulf of Mexico. Oceanographer David Karl of Hawaii University has taken a small sample of Nualgi and is testing it in ship-board experiments in the Pacific, Bhaskar said.

Nualgi's developers hope to promote its use worldwide to revive fresh water eutrophic lakes and the over 500 "dead zones" in coastal regions - so-called because they are so deprived of oxygen that they can't support any aquatic life.

A new study has determined that homes are an alarming and probably underestimated source of water pollution, and can contribute to 50 percent more water pollution than previously believed.
Advertisement
<< New Study Attempts to Reverse Autoimmunity in Type 1 Diabet...
Nanoparticles Quickly Stabilize Blood Flow in Brain After I... >>