US Plans to Limit the Amount of Perchlorate in Water 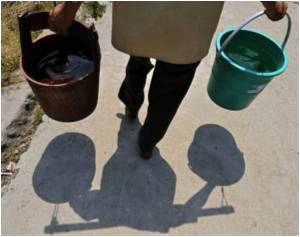 The US government has communicated that it is seriously planning to restrict the amount of perchlorate, which is a chemical in rocket fuel, explosives and bleach, and also found in the drinking water consumed by millions of Americans.

Studies have shown a link between consuming perchlorate and thyroid problems in pregnant mothers and babies, the Environmental Protection Agency said in a statement.

Even as many people in the country are having a tough time to get a proper water supply this summer, many children in various parts of Bihar's Bhojpur district have developed
Advertisement

"Scientific research indicates that perchlorate may disrupt the thyroid's ability to produce hormones that are critical to developing fetuses and infants," the EPA said.

An expert from Tel Aviv University's School of Physics and Astronomy has developed a new system that can help monitor the safety of a building or community's water supply...
Advertisement
The EPA said it decided to reverse the decision in 2008 by the George W. Bush administration not to regulate water for the chemical, after the agency received 39,000 public comments and reviewed research by health experts.

"Our decisions are based on extensive review of the best available science and the health needs of the American people," said EPA administrator Lisa Jackson.

The establishment of the first-ever national standard for perchlorate "will include receiving input from key stakeholders as well as submitting any formal rule to a public comment process," the EPA said.

Senator Barbara Boxer, who heads the Senate Committee on the Environment and Public Works, hailed the EPA decision.

"Perchlorate is a toxic chemical found in rocket fuel. It does not belong in our drinking water," Boxer, a Democrat from California, said at a hearing.

Boxer said that the Bush administration, by refusing to regulate perchlorate, had left "millions of Americans in dozens of states at risk."

The chemical can be either naturally occurring or man-made, and is used in making rocket fuel, fireworks, flares and explosives. It may also be present in bleach and in some fertilizers, the EPA said.

The EPA added that it is "moving towards establishing a drinking water standard to address a group of up to 16 toxic chemicals that may pose risks to human health."

Ground water in Dayalbagh, a suburb of Agra, allegedly contains a high level of fluoride and is causing serious health hazards to locals.
Advertisement
<< Malaria can be Controlled With Intermittent Drug Treatment
Scientists Discover Mechanism Involved In the Spread of Bre... >>