US News Annual College Ranking Lead by Princeton at No 1 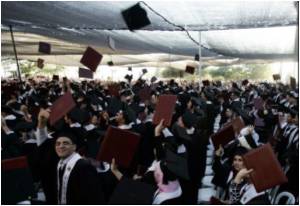 Leading US News and World Report's latest annual ranking of best colleges in the United States is Princeton University.

Harvard University, which shared the top slot with Princeton in a tie last year, placed second, with Yale and Columbia third and fourth and Stanford and the University of Chicago tying for fifth.

Combining bovine cells with a liquid gel and sending it through a 3-D printer followed by tiny particles could lead to the development of synthetic ears.
Advertisement

Launched in 1983 when US News, an online news source, was still a weekly magazine, the list is seen as highly influential among young Americans deciding where get a higher education.


It is based on data from more than 1,900 academic institutions but critics have said its methodology dwells more on a college's status and reputation than it does on educational standards.

Using subconscious mental categories the brain creates, it breaks experiences into the events, or related groups that help us mentally organize the day's many situations.
Advertisement
Of the top 20 colleges, only two -- Rice University in Texas and the University of California at Berkeley -- had tuition and fees less than $40,000 a year.

"Higher education remains an important indicator of future earnings and career stability," said Matt Speer, sales and marketing director for the US News rankings, which costs $30 to access online.

"We're pleased to provide this useful tool and data to help students make an informed decision," he said in a statement.

A separate US News ranking for liberal arts colleges put Williams College and Amherst College, both in rural Massachusetts, and Swarthmore College in Pennsylvania in first, second and third place.

Some 10.3 million people were enrolled in four-year colleges in the United States in 2012, and another 3.8 million in graduate schools, the US Census Bureau reported last week.

But enrollment was down nearly 500,000 from a year earlier, a decline that educational observers called a sign of an improving economy as would-be students over the age of 25 filter back into the labor market.

The international Academic Ranking of World Universities, better known as the Shanghai ranking, put Harvard in first place and Princeton at number seven, with Britain's Cambridge and Oxford the only non-US schools in the top 10.

US President Barack Obama has proposed a new ranking system, overseen by the federal Department of Education, that would judge US colleges on a value-for-money basis and determine how much public funding they would each get.

A new, simple video game has been developed by Princeton University researchers to study the behavior of fish.
Advertisement
<< Market Analysis Finds That People Are Switching to Exotic A...
India's Polio Programme Praised By WHO >>

Yawning Cools Down The Brain

You may yawn out of sheer boredom. But in the process you might be unwittingly cooling down your brain.
Advertisement
News A-Z
A B C D E F G H I J K L M N O P Q R S T U V W X Y Z
What's New on Medindia