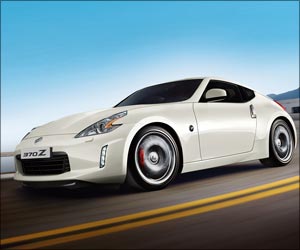 An American man has sold one of his testicles in order to buy his dream car - a Nissan 370.

During CBS's 'The Doctors' show, Mark Parisi announced that he is willing to give his testicle to medical science for 35,000 dollars so he can buy a new Nissan, News.com.au reported.

The asking price, which is in accordance to the standard going rate by American medical science, also happens to be about the same starting price for a Nissan 370Z V6 Coupe.

Heart Disease Risk High in Men With Large Testicles
A new study suggests that men who have larger testicles are at an increased risk of developing ......

Man With Ten-Stone Testicles Undergoes Surgery
A 48-year old man who underwent surgery to remove his ten-stone testicles hopes that he may be able ...

Weak Consumer Demand Hitting Both Big Automakers Like General Motors and Nissan and Smaller Firms
The fledgling electric car business is in turmoil as predictions about potential sales have proven ....

Nissan Car Catches Drunk Drivers Through Sweaty Palms
Motorists tempted to get behind the wheel after one alcoholic drink too many could soon get a ......