US Interior Secretary: Storm-damaged Statue of Liberty to Reopen by July 4 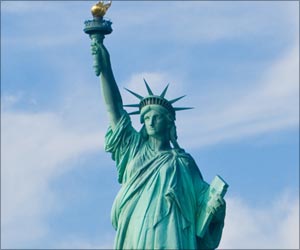 US Interior Secretary Ken Salazar has said that the Statue of Liberty will reopen by July 4 once repairs to extensive damage inflicted on the New York landmark by Hurricane Sandy are completed.

The statue itself, a 19th century gift from France to the United States, weathered the October 29 storm, but serious damage was wrought on ferry docks, energy infrastructure and security screening system on Liberty Island.

In a conference call with journalists, Salazar said that, based on "tremendous progress" so far, "we will be able to reopen the Statue of Liberty by the Fourth of July this year."


The National Park Service (NPS), which manages the Statue of Liberty that drew 3.7 million visitors in 2011, has been "working non-stop to repair this icon of freedom," he said.
Advertisement
"We are now well on our way to meeting our Fourth of July deadline," which coincides with the 238th anniversary of the United States' declaration of independence, he added.

NPS northeast regional director Dennis Reidenbach said it might be possible to open before July 4, so long as the top priority -- ensuring visitors' safety -- is not compromised.

Hurricane Sandy dealt New York a powerful blow when it swept up the northeastern US coast, lifting sea levels by nearly 15 feet (4.2 meters) at the southern tip of Manhattan and destroying entire neighborhoods.

Liberty Island, just 10 acres (four hectares) in size, was three-quarters flooded -- in some places by more than five feet (1.5 meters) of water -- and the two docks on which tourists arrive by small ferry boats were swept away.

The statue itself, which stands 93 meters high and weighs more than 200 tons, sustained no damage. Ironically, the viewing platform within its crown had reopened to the public on the eve of the storm, after a year of repairs.

"Lady Liberty was hit hard by Superstorm Sandy," said Charles Schumer, a US senator from New York mindful the landmark's value as an international tourist draw, "but just like New York, she will be back and stronger than ever."

Fifty-nine million dollars have been earmarked for the repairs to Liberty Island and nearby Ellis Island, the former immigration processing center turned museum dedicated to newcomers to the United States.

Salazar said a date for the reopening of the Ellis Island facility has yet to be set, after some one million artifacts were relocated for safekeeping at other locations.

France gave the Statue of Liberty to the United States -- a decade late -- to mark the centennial of the July 4, 1776 Declaration of Independence.

It was conceived by French sculptor Auguste Bartholdi, with Gustave Eiffel, the engineering mastermind behind the Parisian tower that bears his name, in charge of its internal structure.

Since 1984 the statue has been listed as a world heritage site by UNESCO, the United Nations cultural agency.

Statue Of Liberty To Close For A Year For Giant Makeover
The Statue of Liberty in New York will close for a year from October 28 to undergo a 27.25 million ....

Statue of Liberty Replica in Japan Looking for New Home
After being evicted from outside a shop in a historic Japanese port city following complaints from ....