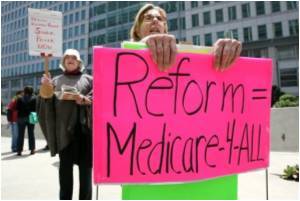 Filmmaker Michael Moore was not exactly talking through his hat when he slammed his country's health system. A Commonwealth Fund survey ranks US last among seven major industrialized countries.

Apart from the US, the countries that were surveyed were Australia, Canada, Germany, the Netherlands, New Zealand and the United Kingdom. More than 27,000 patients and primary care doctors participated in the study that covered the last three years.

Online data of over 5,450 hospitals from both private and public sectors that can be searched by name, city, state or pincode
Advertisement

Despite having the costliest health care system in the world, the United States is last or next-to-last in quality, efficiency, access to care, equity and the ability of its citizens to lead long, healthy, productive lives, says the report .


"On many measures of health system performance, the U.S. has a long way to go to perform as well as other countries that spend far less than we do on healthcare, yet cover everyone," the Commonwealth Fund's president, Karen Davis, said during a Tuesday morning teleconference.

The pressure is being put on the new Government to deliver a solution to Australia's deteriorating health care system with a focus on the areas of workforce, public hospitals.
Advertisement
"It is disappointing, but not surprising, that despite our significant investment in health care, the U.S. continues to lag behind other countries," she added.

Previous reports by the nonprofit Fund, which conducts research into healthcare performance and which promotes changes in the U.S. system, have been heavily used by policymakers and politicians pressing for healthcare reform.

According to 2007 data included in the report, the U.S. spends the most on health care, at $7,290 per capita per year. That's almost twice the amount spent in Canada and nearly three times the rate of New Zealand, which spends the least.

The Netherlands, which has the highest-ranked health care system on the Commonwealth Fund list, spends only $3,837 per capita.

The U.S. ranks in the middle of the pack in measures of effective and patient-centered care, she added.

Overall, the Netherlands came in first on the list, followed by the United Kingdom and Australia. Canada and the United States ranked sixth and seventh, Davis noted.

Speaking at the teleconference, Cathy Schoen, senior vice president at the Commonwealth Fund, pointed out that in 2008, 14 percent of U.S. patients with chronic conditions had been given the wrong medication or the wrong dose. That's twice the error rate observed in Germany and the Netherlands, she noted.

"Adults in the United States [also] reported delays in being notified about abnormal test results or given the wrong results at relatively high rates," Schoen said. "Indeed, the rates were three times higher than in Germany and the Netherlands."

"As a result we rank last in safety and do poorly on several dimensions of quality," Schoen said.

In addition, many Americans are still going without medical care because of cost, she said. "We also do surprisingly poorly on access to primary care and access to after hours care given our overall resources and spending," Schoen said.

In fact, 54 percent of people with chronic conditions reported going without needed care in 2008, compared with 13 percent in Great Britain and 7 percent in the Netherlands, she said.

The United States also ranked last in efficiency, Schoen said. There are too many duplicate tests, too much paperwork, high administrative costs and too many patients using emergency rooms as doctor's offices. In addition, poverty appears to be a big factor in whether Americans have access to care, the report found.

Besides the country performed worst in terms of the number of people who die early, in levels of infant mortality, and for healthy life expectancy among older adults, Schoen said.

However, Fund's president Karen Davis believes new health care reform legislation -- when fully enacted in 2014 -- will go a long way to improving the current system. "Our hope and expectation is that when the law is fully enacted, we will match and even exceed the performance of other countries," she said.

But Dr. Steffie Woolhandler, a professor of medicine at Harvard Medical School and co-founder of Physicians for a National Health Program, is skeptical. He insists that "the U.S. has the worst health care system among the seven countries studied, and arguably the worst in the developed world."

"Unfortunately, the U.S. will almost certainly continue in last place, since the recently passed health reform will leave 23 million Americans without coverage while enlarging the role of the private insurance industry, which obstructs care and drives up costs," she said.

Australia has been ranked joint last with the US in how easily citizens can get timely healthcare.

It also performs poorly for safety and equity. It ranked third out of seven overall, and came top in just one measure -- the ability of its citizens to lead long, healthy and productive lives.

On other measures, Australia performed much worse, coming equal last with US for access to care, sixth or second-last for safety of care (above only the US), and fourth for equity.

The comparison, by the US-based Commonwealth Fund, was most damning of Australia's patchy access to healthcare services, ranking the country sixth out of seven for the frequency with which patients were hit with medical bills of more than $US1000 ($1228) in the previous year.

Problems with timeliness of care was another black spot, with Australia ranked last, below the US, for the number of patients who needed medical attention finding it hard to get it at night or weekends.

Australia was also second-worst, in sixth place, for the number of GPs who said patients who wanted a same-day or next-day appointment could get one.

A spokeswoman for the federal Health Minister, Nicola Roxon, said the report showed why the government's reforms to the national health system were required.

As for the UK, its health system is the most efficient, the study said.

Overall the UK's system was ranked second - behind Holland but ahead of Australia, Germany, New Zealand, Canada and the United States in last place.

However, although Britain scored highly on quality of care and access to care, it came second to last for 'long, healthy, productive lives'.

Britain also came bottom for life expectancy of patients at age 60. The UK's was 22.5 years, well behind leading nation Australia with 24.6 years.

"The US and UK had much higher death rates in 2003 from conditions amenable to medical care than some of the other countries, for example rates 25 per cent to 50 per cent higher than Canada and Australia," the report said.

The report also said the UK outperformed the other countries on six of the 10 chronic care management indicators, suggesting it may be down to 'the major push made by the UK government to implement health information technology."

However UK patients may now face longer waits to see their GP after a controversial target that everyone should be seen within 48 hours was scrapped on Monday.

Health Secretary Andrew Lansley said getting rid of the targets will mean that thousands of bureaucrats can be dispensed with, slashing 46 per cent off the NHS management budget by 2014.

Striking Improvements in Critical Care are the Basis of NHS Plan

In a paper on BMJ, researchers have said that survival among patients in intensive care units in England has improved significantly since the implementation of the NHS Plan in 2000.
Advertisement
<< No Going Back on Health Care - Obama
Pulmonary Embolism Higher Among Blacks In US >>

Healthcare Insurance-Common Terms and Definitions
News Archive
News Resource
Advertisement
News Category
Milestone In Voluntary Blood Donation Achieved Samsung Reinvents Toilet for the Poor Which is a Better Form of Exercise: Daily or Weekly? First Phase of Foot-and-Mouth Disease Vaccination Shocking News: Polio Cases Return After a Decade in the US
More News
Sign up for Wellness Consult a Doctor Sign up for Selfcare

Find a Doctor Sinopril (2mg) (Lacidipine) Drug - Food Interactions Calculate Ideal Weight for Infants Diaphragmatic Hernia Iron Intake Calculator Drug Side Effects Calculator Find a Hospital A-Z Drug Brands in India Pregnancy Confirmation Calculator
This site uses cookies to deliver our services. By using our site, you acknowledge that you have read and understand our Cookie Policy, Privacy Policy, and our Terms of Use