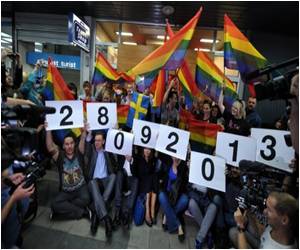 It is the welfare of children that is at stake when the US Supreme Court hears oral arguments on the hot button issue of same-sex marriage next week.

"Children do best with a mother and father, and marriage is the most important social institution we have to connect moms and dads to their children," said Thomas Peters of the National Organization for Marriage.

"In the first place, it's for the interests of children," Peters told AFP ahead of the hearings that begin Tuesday when NOM and other groups that defend traditional marriage will be protesting on the court steps.


Judicial and political analysts say that a Supreme Court decision on marriage equality could open the way to the full legalization of gay marriage, which is already recognized in nine states and the District of Columbia home to the US capital Washington.
Advertisement
"We are in favor of traditional marriage because it's the way God intended it to be, between one man and one woman, for the fruitfulness and the multiplication of the human race," said Preston Noell, president of Tradition, Family and Property, a co-organizer of Tuesday's March for Marriage rally.

"Same-sex marriage violates that principle," he said. "It's phony. It's fake. It's like counterfeit money."

Noell argued that marriage is "essentially a contract according to natural law" and an institution that predates both church and state.

"It's meant for raising children in a very good atmosphere so they can grow up be good citizens," he said.

"If we take this away, we take away a mother or a father from the child. We make the child poorer, because the mother and father each have special gifts that God gave them, that help the child to understand the way the world is."

Growing up in a same-sex relationship, he said, "the child is going to suffer... Two mothers or two fathers, that's not the same thing."

Paul Linton, a lawyer for the Family Research Council, one of the groups that will be putting forth arguments to the Supreme Court justices, said that American law has always defined marriage in heterosexual terms.

"Most of the Supreme Court decisions involving marriage (in the past) have spoken of procreation -- which obviously can't happen with the same-sex couples," he said.

Public opinion polls indicate regularly that a majority of Americans favor marriage equality, but NOM spokesman Peters said: "The only poll that matters is a free and fair vote of the people."

Thirty-one states to date have legal instruments in place that specify that marriage is exclusively a union between a man and a woman.

To press their case, opponents of gay marriage have campaigned against the adoption of children by gay and lesbian couples. Such adoptions are banned in five states to date, but authorized in 18 and the District of Columbia.

According to a study by the Williams Institute, a think tank that focuses on the LGBT community, nearly half of all lesbians in the United States, and one in five gay men under the age of 50, are now raising at least one child.

Robert Oscar Lopez, a 42-year-old English teacher who describes himself as a bisexual raised by two lesbians, one of whom was his biological mother, plans to attend the demonstration outside the Supreme Court.

"Quite simply, growing up with gay parents was very difficult, and not because of prejudice from neighbors," he said. "My peers learned all the unwritten rules of decorum and body language in their homes.

"They understood what was appropriate to say in certain settings and what wasn't. They learned both traditionally masculine and traditionally feminine social mechanisms."

Sociologists and pediatricians, however, see little if any danger.

"When the social science evidence is exhaustively examined... the facts demonstrate that children fare just as well when raised by same-sex parents," the American Sociological Association says.

The American Academy of Pediatrics says that "children need secure and enduring relationships with committed and nurturing adults to enhance their life experiences for optimal social-emotional and cognitive development.

"Scientific evidence affirms that children have similar developmental and emotional needs and receive similar parenting whether they are raised by parents of the same or different genders," it added.

More News on:
Height and Weight-Kids How to Save your marriage Divorce: Pros and Cons Is Life Better Staying Single or Getting Married?

Most of the Americans' Support Gay Marriages
According to a new poll, Americans support for same-sex marriage has reached a record high....