US Egg Farm Owner Apologizes for Salmonella Outbreak; Another Refuses to Testify

Even as the executive of another farm linked to the salmonella outbreak refused to testify, the head of an Iowa egg farm apologized for the illnesses caused when facing a grilling in Congress on Wednesday.

Invoking his constitutional right, Hillandale Farms chief executive Orland Bethel declined to answer questions from US lawmakers about his farm's role in the outbreak which led to the largest egg recall in US history.

But Austin "Jack" DeCoster, owner of Wright County Egg, told a House of Representatives subcommittee on investigations that "we were horrified to learn that our eggs may have made people sick."


"We apologize to everyone who may have been sickened by eating our eggs," he said.

DeCoster acknowledged that Wright County Egg had been in trouble with health authorities numerous times in the past, saying that the family-owned farm simply grew too quickly.

"While we were big, but still acting like we were small, we got into trouble with government requirements several times. I am sorry for those failings. I accept responsibility for those mistakes in our operations," DeCoster said.

With Bethel backing out of testimony, another Hillandale Farms representative, Duane Mangskau, said he was "shocked" to learn that restaurant customers may have been poisoned by salmonella in eggs from his farm, or that the company was even involved in a recall.

"The recall has, however, forced Hillandale to take a hard look at our operations, and will, in the long run, make our operations better," Mangskau said in prepared remarks.

More than half a billion eggs were recalled this year, the largest recall in the US industry's history.

Wright County Egg and Hillandale Farms have been cited as sources of the infection. Dozens of brands in 22 states that take the farms' eggs were affected.

In an opening statement, Representative Bart Stupak, chairman of the energy and commerce subcommittee on investigations, said the latest findings "paint a very disturbing picture of egg production in America."

"When FDA inspectors entered the plants in August, they found facilities riddled with unsanitary and unsafe conditions," including live rodents in the laying houses, manure oozing from buildings, dead and decaying chickens, and more positive test results for salmonella in the farms.

He said DeCoster had so many violations that Iowa authorities had declared them "habitual violators" of safety regulations.

Salmonella Scare in US Reveals Danger of Big Monopolies
More than half a billion salmonella-tainted eggs were withdrawn in US markets, highlighting the danger of letting the egg industry be controlled by just a few big producers.
READ MORE 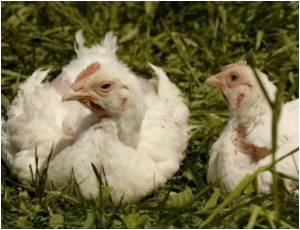 Salmonella Scare Prompts Recall of Over 200 Million US Chicken Eggs in US
FDA has reported that a US egg producer has recalled more than 200 million chicken eggs possibly contaminated with salmonella bacteria after hundreds of reported cases of illness.
READ MORE

Scientists Discover Mechanism Affecting Salmonella Virulence, Drug Susceptibility
The mechanism behind Salmonella's virulence and its susceptibility to antibiotics has been uncovered by scientists.
READ MORE