US Drought may Cause World Food Prices Hike 'Within A Year' 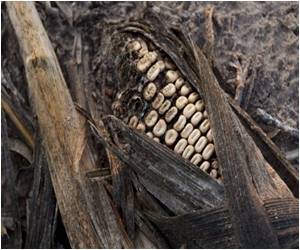 World food prices could hike in the first quarter of next year, and then keep rising, as crops in the US have been hit by the country's worst drought since 1936, an analysis by Rabobank.

By June 2013, food prices tracked by the United Nations could climb up to 15 percent from current levels, according to the bank's analysts.

India's meteorological department has said that rainfall this year has been 23 percent below average at the end of the monsoon season, making it the worst drought since 1972 in the country.
Advertisement

"The coming year will see the world economy re-enter a period of agflation as grain and oilseed stocks decline to critically low levels, pushing the FAO [Food and Agricultural Organisation] Food Price Index above record nominal highs set in February 2011," they said.


According to the Telegraph, for policy-makers, the rise in food prices signals problems, as high food prices tend to magnify social unrest.

"Politics and economics are inextricably linked as exemplified by the Arab Spring, which was preceded by a rise in food prices," Hermes fund managers in a recent report said.

Call To Ease Restrictions on Imports After 'Sperm Drought' in Victoria

Women in Victoria are finding it difficult to start a family because IVF clinics here are already running low on sperm donor supplies.
Advertisement
According to the report, Rabobank said that the consumer impact could be less painful this time compared to 2008, when there were severe shortages of wheat and rice.

Rabobank said that this is because today's shortages are being seen more in crops used as animal feed, such as corn and soybeans.

Food prices will rise in a very different global economic environment, with Chinese demand slowing and the debt problems of the West weighing on world growth, it said.

Britons, who consume high levels of meat and dairy products, will definitely feel the impact of this latest bout of agflation, Rabobank said.

Droughts would make the verdant Amazon rainforest even greener, a new study by a team of researchers from the University of Arizona, US, has revealed
Advertisement
<< Uruguay Set to Legalize Abortion
Bath Salts With Ingredient 10 Times Stronger Than Cocaine >>

Is the US heading for a mega drought ?

Scientists have built a climate model which has suggested that ocean changes may bring about a megadrought in the US that would span a period of 500 years.
Advertisement
News A-Z
A B C D E F G H I J K L M N O P Q R S T U V W X Y Z
What's New on Medindia