US Doctors Arrested In Zimbabwe For 'Running AIDS Clinic Without Permit' 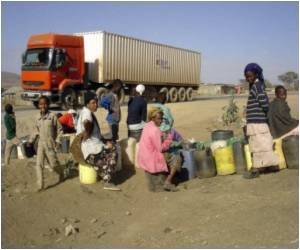 Police in Zimbabwe have arrested five US health workers and a Zimbabwean doctor for allegedly operating an AIDS clinic without a licence in the capital Harare.

"The two charges are that they were practising without a permit and distributing drugs without a pharmaceutical licence," their lawyer Jonathan Samukange told AFP.


"Five of them are American nationals -- four are doctors and one is an administrator -- and the sixth person is a Zimbabwean doctor," he said.


Samukange said the six were operating a clinic in Harare and another at an orphanage in the northeastern town of Mtoko.

The Americans, who are being held in smelly, poorly ventilated cells at Harare Central police station, were to have appeared in court on Saturday for a bail hearing, but the police said they had not finished the paperwork. The Americans are expected to appear before a magistrate on Monday, New York Times reported.

The state-run newspaper, The Herald, on Saturday quoted a spokesman for the criminal investigations department, Detective Inspector Augustin Zimbili, confirming the arrests and the charges.

The Americans belong to the Allen Temple Baptist Church AIDS Ministry in Oakland, Calif. The church serves a predominantly African-American congregation. Three or four times a year since 2000, members have paid their own way to Zimbabwe to give antiretroviral medicine, vitamins, clothing and food baskets to impoverished people with AIDS.

On this trip, the team had brought a four-month supply of antiretroviral drugs for about 800 people with AIDS, some of them orphaned children.

Zimbabwe's public health sector is still recovering from the country's decade-long political and economic crisis, which saw most hospitals and clinics close.

Public health facilities have begun reopening and restocking since the formation of a power-sharing government between President Robert Mugabe and former opposition leader Morgan Tsvangirai in February 2009.

Defending the arrests, a police spokesman said, "It is our duty to ensure that all clinics and medical institutions are registered for easy monitoring," The Herald quoted Detective Inspector Zimbili as saying. "There is a risk of dispensation of expired drugs. When premises are not licensed, it is difficult to check if the act is being complied with."

The lawyer for the Americans, Mr. Samukange, denied the charges. He said the doctors who dispensed the medicine, Dr. Andrew Reid, an American resident of Zimbabwe, and Dr. Tembinhosi Ncomanzi, a Zimbabwean, were licensed to practice there.

In addition to the two doctors, according to the Oakland ministry, the others in custody include two nurses, David Greenberg and Gregory Miller, and the head of the AIDS ministry, Gloria Cox-Crowell. "They're all in good spirits," Mr. Samukange said.
Kenric Bailey, a member of the AIDS ministry, said a soured relationship with a Zimbabwe charity was at the root of the arrests.

But Mr. Samukange said he expected that the American medical team would be released on bail on Monday and subjected to nothing more than a fine.

Zimbabwe's Women Hardest Hit With AIDS Burden
Cecilia Chinhamo has endured a torrent of verbal abuse from her husband, since testing positive for HIV six years ago.
READ MORE