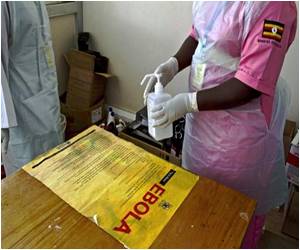 A US doctor who contracted the Ebola virus while working in Liberia revealed that he is growing stronger two weeks after being diagnosed with the infection.

"I am growing stronger every day, and I thank God for His mercy as I have wrestled with this terrible disease," Kent Brantly, 33, wrote in a letter posted online by the Christian aid group for which he worked, Samaritan's Purse.


Brantly said he was writing from his isolation unit at Emory University Hospital, where he was admitted on Saturday.


"My wife Amber and I, along with our two children, did not move to Liberia for the specific purpose of fighting Ebola. We went to Liberia because we believe God called us to serve Him at ELWA Hospital," he wrote.

Since March, West Africa has faced the largest outbreak of the hemorrhagic virus in history, with 932 deaths and some 1,700 people infected across Sierra Leone, Guinea, Liberia and Nigeria.

The virus causes fever, vomiting, diarrhea and bleeding. Some 55 percent of cases in this outbreak have been fatal.

"When Ebola spread into Liberia, my usual hospital work turned more and more toward treating the increasing number of Ebola patients," Brantly wrote.

"I held the hands of countless individuals as this terrible disease took their lives away from them. I witnessed the horror firsthand, and I can still remember every face and name."

Brantly's wife and children had returned to the United States for a brief trip when he became sick late last month.

Ebola is spread through contact with the bodily fluids of an infected person, and healthcare workers and family members are particularly at risk of contracting the disease.

"When I started feeling ill on that Wednesday morning, I immediately isolated myself until the test confirmed my diagnosis three days later," Brantly said.

"When the result was positive, I remember a deep sense of peace that was beyond all understanding."

Brantly was evacuated to the United States on a specially equipped small plane and arrived at Emory University Hospital on Saturday.

Another American missionary, Nancy Writebol, followed him on Tuesday.

Both were given experimental drugs to treat their symptoms, and both are reportedly on the mend though health experts say it is unclear whether the medications played a role.

"Now it is two weeks later, and I am in a totally different setting," Brantly said.

"My focus, however, remains the same -- to follow God," he added.

US to Send Extra Personnel and Resources to Help Nigeria Overcome Ebola Outbreak
With Nigeria becoming the latest victim of the Ebola outbreak in West Africa, health authorities in the US have quickly swung into action.
READ MORE

Ebola Outbreak Dramatic but Containable,' Say Experts as They Warn Against Overreaction
Health experts have said that while the current Ebola outbreak is deadly, it is a containable disease.
READ MORE

Nigeria Follows Liberia in Declaring National Emergency Over Ebola Outbreak
The Nigeria president has followed the footsteps of his Liberiaian counterpart by declaring a national emergency after the Ebola virus claimed two lives in the country.
READ MORE

Eradicate Quackery, Save LivesCongo FeverLaymans Guide to Understanding Medical SpecialistsEbola Virus Disease
Sign up for Wellness Consult a Doctor Sign up for Selfcare