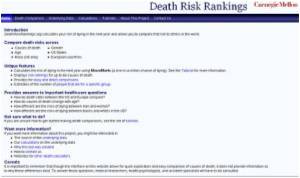 A website is being created by a US doctor to make it easier for sick people to connect with research that could potentially save their lives.

The non-profit endeavor known as MyClinicalTrialLocator.com aims to become "the Wikipedia of clinical trials," by allowing a quick and free search for studies at academic centers around the globe, said its founder Bruce Moskowitz.

It also seeks to provide an easier experience than the US government-run website ClinicalTrials.gov, which critics say is difficult to navigate and understand -- but nevertheless serves as the industry standard.


MyClinicalTrialLocator.com is "really a resource for everybody, worldwide, for free," said Moskowitz, a primary care physician in Palm Beach, Florida, whose mobile patient population -- many of whom migrate north for the summer -- gave him the idea of finding better ways to share information.
Advertisement
The new site contains trials run by academic centers on a wide range of topics including cancer, anxiety and infertility. And one month after its launch, its database already boasts 141,923 trials from around the world.

That's quite close to the National Institutes of Health's (NIH) ClinicalTrials.gov, which includes more than 144,000 trials in all 50 US states and 185 countries.

Moskowitz, 64, hopes the new site will improve the quality of research by diversifying the pool of candidates in various studies, and will help identify where money and time is being lost.

"It is going to be a revelation to see how many clinical trials are duplicated from ones outside North America without anyone knowing it's already been done and wasting money," he told AFP.

The new site is an open-source platform, so academic centers can send in their own information. It updates automatically and can send users alerts when a trial status changes or a new trial opens up.

It also allows patients to email a doctor in any country to find out about a clinical trial, Moskowitz said.

Developing the site took about a year, and was assisted with the input of 150 professionals from leading academic and medical centers in the United States including the Mayo Clinic, Johns Hopkins, Columbia Presbyterian, Stanford University, Duke University, and Massachusetts General Hospital, he said.

Some consumers and medical professionals have complained about ClinicalTrials.gov, saying it takes too long to search and is hard to understand.

"You almost have to be a physician or an oncologist with the dot-gov site to be able to decipher what a lot of the factors are," said Cassie Kautzmann, a 54-year-old cancer survivor who said she frequently Googles for medical information instead.

Kautzmann was diagnosed in 2007 with leiomyosarcoma, a rare cancer. She has already taken part in two clinical trials, which brought her back from the brink of death.

"Right now I am in remission but that is probably doing to be short-lived," she told AFP. She said she hopes the new website will help find her next experimental treatment.

However, some experts believe that ClinicalTrials.gov is not going away any time soon.

The government registry was started in 1997 and by 2007 it became mandatory for researchers to use it to record data on most middle and late-stage trials regarding intervention drugs and devices.

Many respected peer-reviewed medical journals also require that studies be registered with ClinicalTrials.gov before they can be considered for publication.

One group, known as the Clinical Trials Transformation Initiative, uses ClinicalTrials.gov to look for ways that research as a whole is falling short, such as by trending toward studies that are too small or lacking in scientific rigor.

Bradford Hirsch, assistant professor of medicine at Duke University and a researcher with CTTI, said he has heard of other attempts to improve on the government database.

"What we have found is that the basis has to still be ClinicalTrials.gov because of mandated registration by the FDA as well as by the medical journal editors," Hirsch told AFP.

"It would be unlikely that anybody could really take the place of ClinicalTrials.gov, so our biggest focus is on continuing to improve that and other large registration sites in the US and outside with the obvious hope that other mechanisms will come up that can really make it more robust."

When asked to respond to criticism of the government's site, a spokeswoman from the NIH said in an email: "We are always pleased when data from ClinicalTrials.gov are used by different sources in different ways to increase access to information about clinical trials."

A New Website - InsuranceComplaint.com Launched
Finally a web site where policy holders can be assured of help while making their claims....

Dietary Recommendations on Cancer Institution Websites are Not Consistent
A new study found online dietary recommendations for cancer patients, even if they are published on ...

Studies Reveal Severely Depressed Patients Can Benefit from Self Help Books and Websites
Researchers recommend low-intensity interventions such as self help books and websites in the first ...