US Disneyland Sued by Muslim Employee over Headscarf Ban 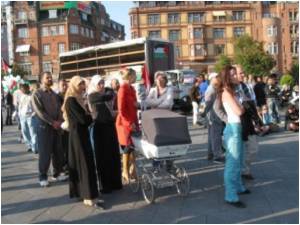 Headscarf row has surfaced again and this time it is a Muslim woman who is suing Disneyland, accusing the company's California theme park of discrimination for telling her she could not serve customers if she chose to wear a headscarf.

Imane Boudal, 26, asked her employers at Disneyland's Grand Californian Hotel several months ago whether they would permit her to wear a headcovering while working as a hostess, a spokeswoman for a worker's union said.

France Likely to Impose Ban on Burqa in Public Institutions

France is likely to impose a ban which will forbid Muslim women from wearing the burqa or full Islamic veil in public institutions.
Advertisement

But when no reply was forthcoming, she decided to don the headscarf anyway, timing her decision with the beginning of the Muslim holy month of Ramadan, Leigh Shelton, a spokesman for the UNITE HERE Local 11 union said.


"Disney told Boudlal that if she wanted to work as a hostess she had to remove her hijab because it did not comply with the 'Disney Look,'" Shelton said in a statement.

The burqa is now officially banned in the Italian spa resort town of Montegrotto Terme.
Advertisement
"Disney further advised Boudlal that if she refused to remove her hijab, she could either work a back-of-the-house position where any customers would not see her, or else go home."

Boudlal refused the compromise and is now bringing Disney before the US Equal Opportunity Commission, a federal agency that handles claims of workplace discrimination.

The local branch of the Council on American-Islamic Relations, an advocacy group, said it had sent a letter to Disney demanding that the firm accommodate Boudlal.

"There is no justification for Disney's refusal to allow Ms Boudlal to wear her headscarf at work," said Ameena Mirza Qazi, deputy executive director and staff attorney at the group.

"To say that her headscarf would somehow impact guests is not only insulting to her, but is deeply offensive to the thousands of Muslims who open up their pocket-books at Disney parks and resorts every year," Qazi added in a statement.

Are Patients Discriminated in UK?

Patient says she felt 'humiliated when she was coerced by a Muslim doctor to wear an Islamic headscarf'.
Advertisement
<< Cougars On The Prowl - A Media Myth?
Depression can be Treated with Magic Mushrooms: Swiss Scien... >>

Drug Side Effects Calculator Sanatogen Blood - Sugar Chart Loram (2 mg) (Lorazepam) Find a Hospital Calculate Ideal Weight for Infants Daily Calorie Requirements Selfie Addiction Calculator Vent Forte (Theophylline) The Essence of Yoga
This site uses cookies to deliver our services. By using our site, you acknowledge that you have read and understand our Cookie Policy, Privacy Policy, and our Terms of Use