US Debate Over an Immigration Reform 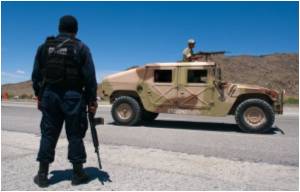 In search of a better life in United States, most of the local men have already trekked down the mountain and left the rural hamlet of Los Huesos in central Mexico.

So for the elderly, the women and the children who remain in this village of around 60 families, the debate over an immigration reform now taking place many hundreds of miles away north of the border hits close to home.

Migration will be among the top issues when US President Barack Obama visits Mexico and Costa Rica this week and many in the region hope Washington will finally act to give 11 million undocumented workers a path to citizenship.


Around two-thirds of those hoping that a reform will help them settle legally are from Mexico and many others come from Central America.

Los Huesos, a village with one small grocery store and no medical center, sits in the state of Guanajuato, home to almost 11 percent of the Mexicans who emigrate to the United States every year, according to official figures.
Advertisement
Olga Perez, 21, walks six kilometers to the nearest Internet cafe every week in order to communicate with her brothers, who work in potato fields in the northern US state of Idaho. She hopes to join them one day.

But the path to joining her brothers may be long.

A bill introduced by a bipartisan group of US senators would give temporary legal status to undocumented migrants who can prove they have been in the United States since before December 31, 2011.

After 10 years, these immigrants could file for permanent residency. Three years later, they could request citizenship.

But to convince hardline Republicans opposed to the idea of amnesty, the Senate negotiators included ambitious measures to tighten security along the 1,800-mile (3,000-kilometer) border with Mexico.

They want to avoid a repeat of 1986, when Republican president Ronald Reagan approved reforms that led to amnesty for 2.7 million people but, because of a lack of border resources, did little to stem the tide of illegal arrivals.

Mexican analysts say the reform would not stem the flow of illegal immigration because the decision to cross the border is tied to the health of the US economy.

"Immigration will be tied more to economic growth in the United States than reform," said Adolfo Laborde, director of the international relations department at the Monterrey Technology university.

The state of the US economy has also affected the amount of money that Mexican migrants send back home.

Remittances -- Mexico's third largest source of foreign currency after oil exports and tourism -- the fell for the eighth consecutive month in February, dropping to $1.59 billion compared to $1.79 billion in the same month of 2012.

Around 250,000 Mexicans were deported in the past year after trying to illegally cross the border, but immigration specialist Javier Urbano Reyes said just as many were able to sneak into the United States.

He said reform could open to door to other controversies since it would eliminate 70,000 residency cards reserved for siblings and married children of US citizens while increasing the number of visas for highly skilled workers.

"The table will be set for a huge legal and fiscal dispute in the United States," said Urbano Reyes, coordinator of the migration program at the Iberoamericana University.

Mexico Reeling from Huge Shortage of Eggs
Mexicans are dealing with a severe shortage of eggs following a bird flu outbreak that led farmers ....

Mexico Declares Bird Flu Outbreak is Under Control
A bird flu outbreak in the west of Mexico that had triggered the slaughter of 22 million hens since ...

Surveys Overestimate Abortions 10-fold in Mexico
A collaborative study revealed that opinion surveys used by researchers from the Guttmacher ......