US Curbs Use of Certain Antibiotics in Livestock 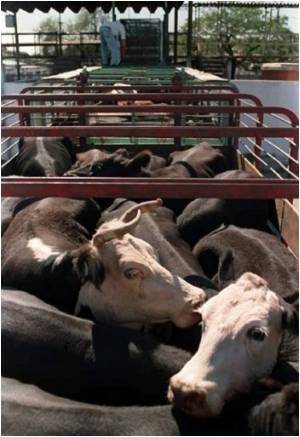 US restricts the use of some antibiotics in cows, pigs and poultry to prevent superbugs, say health officials.

The order by the Food and Drug Administration applies to a common class of drugs known as cephalosporins, which are often given to healthy animals as a preventive measure to ward off potential infections.

Beginning in April, the FDA will ban the use of cephalosporin drugs for disease prevention in livestock.


The FDA order also prevents such drugs, intended for humans or pets, from being administered in any "unapproved" way to cattle, swine, chickens or turkeys.

This medication is a cephalosporin antibiotic, used to treat certain infections caused by bacteria, such as bronchitis and infections of the ears, throat, sinuses, and skin. It kills the bacterial cells.
Advertisement
That means veterinarians can still "prescribe cephalosporins for limited extra-label use in cattle, swine, chickens or turkeys as long as they follow the dose, frequency, duration, and route of administration that is on the label," said the FDA in a statement.

The drugs can also still be used in ducks and rabbits.

The move aims to protect the effectiveness of these drugs in humans, and "is intended to reduce the risk of cephalosporin resistance in certain bacterial pathogens," the FDA said in a statement.

"We believe this is an imperative step in preserving the effectiveness of this class of important antimicrobials that takes into account the need to protect the health of both humans and animals," said Michael Taylor, FDA deputy Commissioner for Foods.

The agency noted that it had taken into account "substantial public comment" on the matter since 2008, when it issued but then revoked a similar order before it could be implemented.

US Congresswoman Louise Slaughter called the move a "modest first step" by the FDA and noted that the Centers for Disease Control and Prevention said in 2009 that nearly three percent of all salmonella cases were cephalosporin-resistant.

"We don't have time for the FDA to ploddingly take half-measures. We are staring at a massive public health threat in the rise of antibiotic-resistant superbugs," Slaughter said in a statement.

"We need to start acting with the swiftness and decisiveness this problem deserves."

When diseases become resistant, doctors must turn to other drugs that may not be as effective or may have stronger side effects, the FDA said.

Diabetes patients have reduced immunity, which makes them more susceptible to skin infections like boils. ...

Antibiotics like tetracyclines and fluoroquinolones used in the treatment of bacterial infections interact ...